← Could Yarra Boulevard be a ‘Bicycle Boulevard’?
-Are there really limits to what planning can do? →

Where is Melbourne’s ‘centre of gravity’ ? 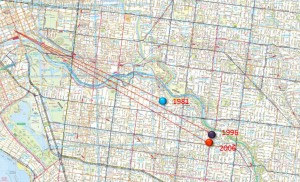 Is it the city centre? No, for one thing the CBD’s only got around 15% of all metropolitan jobs. For another, the combination of Melbourne’s distinctly lop-sided growth south of the Yarra and the fact that 72% of jobs are more than 5 km from the CBD, suggests it’s going to be somewhere south east of the CBD.

So I’ve calculated the location of the centre of gravity (more correctly, the ‘centre of mass’) of jobs from Census data. The accompanying chart shows how that location changed over the period from 1981 to 2006.

This movement reflected the much stronger growth in jobs in the suburbs over this period compared to the CBD and inner city.

Virtually all of that movement occurred over the fifteen years between 1981 and 1996. However between 1996 and 2006, it pretty well stayed put. This wasn’t because jobs grew relatively stronger in the west and north from 1996 but rather because jobs in the inner city stopped declining and started to grow.

Inner city job growth was very strong over the ten years to 2006, especially when compared to its long run decline since at least the early 70s. This is sometimes interpreted as evidence that the inner city, benefitting from the shift toward a more knowledge-intensive economy, assumed a more dominant role in the metropolitan area’s employment market.

That’s incorrect. The reality is that for the first time in years, jobs growth in the inner city was vigorous enough to keep pace with growth in the suburbs, enabling it to hold – but not increase – its share of metropolitan employment. The 2011 Census will give us reliable information on whether or not the inner city has finally regained the upper hand from the suburbs.

The clear and unmistakeable message, though, is that the great bulk of Melburnians not only live in the suburbs but work in them too. Policy that doesn’t recognise that reality is doomed to fail.

The CBD and inner city nevertheless have distinctly different economic functions from the suburbs. I’ll look at that soon.

12 Comments on “Where is Melbourne’s ‘centre of gravity’ ?”