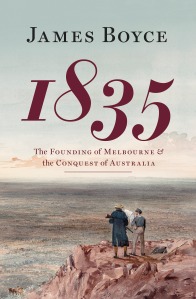 THIS COMPETITION IS NOW CLOSED

Courtesy of the random number generator at Random.org, the winners are Russell Pollard (My Brown Yarra by Margaret Roadknight ) and Justin Chieu (Chapel St by Something for Kate).

I haven’t read James Boyce’s new book, 1835: The Founding of Melbourne and the Conquest of Australia (RRP $44.95) yet, but but I’m planning to write a review in the near future. I’ve read one or two others on the early years of Melbourne and it’s a fascinating period. I’m therefore pleased to say the publisher, Black Inc., has made two copies available for readers of The Melbourne Urbanist. Here’s a summary:

In 1835 an illegal squatter camp was established on the banks of the Yarra River. In defiance of authorities in London and Sydney, Tasmanian speculators began sending men and sheep across Bass Strait – and so changed the shape of Australian history. Before the founding of Melbourne, British settlement on the mainland amounted to a few pinpoints on a map. Ten years later, it had become a sea of red.

In 1835 James Boyce brings this pivotal moment to life. He traces the power plays in Hobart, Sydney and London, the key personalities of Melbourne’s early days, and the haunting questions raised by what happened when the land was opened up. He conjures up the Australian frontier – its complexity, its rawness and the way its legacy is still with us today.

Here’s a review by Mark Rubbo from Readings. Here’s an interview with James Boyce that appeared in the Herald Sun and another he did on ABC Radio National’s Late Night Live.

And to whet your appetite, here from the author himself is a dozen things you may not have known about the founding of Melbourne:

All you have to do is tell me your favourite song that references or evokes Melbourne in some way and you’re in the running. Just use the Comment box at the bottom of this page. Entries close midday, Thursday 25 August.

As usual, the quality of the song you choose doesn’t matter, because the winners will be chosen at random (if you’re stuck, Up There Cazaly will do). Still, it’s nice to show some taste and wit if possible. It would be wonderful to compile a comprehensive anthology of Melbourne-related songs from all eras (although such a list already exists!)

If you’re one of the winners (and the odds are pretty good!), you’ll have to give the publishers, Black Inc., your address and they’ll post your bounty to you direct. Your anonymity is assured – I won’t know who you are or where you live. Sorry overseas readers, you’ll need an Australian address (you should see what Australians have to pay for postage!).

Not that anyone’s asked, but let me explain how I choose the winners of giveaways. First, I count the number of comments, excluding any invalid entries (e.g. pingbacks, replies by me). I then get two random numbers at Random.org. Then I count through the valid entries starting from the first comment (the top one) until I arrive at the two winners.