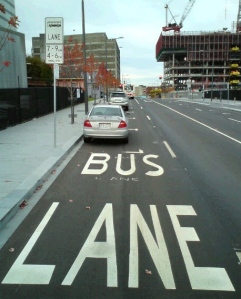 When government agencies first started to put up web sites in the 1990s, management tended to treat them as little more than electronic brochures. Typically, no one in authority bothered to respond to e-mails. I hope that agencies today aren’t making the same mistakes with social media.

Social media is a rich source of ‘intelligence’ for consumers, business and, not least, policy-makers and implementers. There’s an extraordinarily valuable and growing pile of information out there in the ether. Public agencies and private providers should be mining it like robber barons!

I follow the tweets of bus driver, @bustration, who records the tribulations – and the occasional delights – of life on the road. She drives in Melbourne, but what she sees is bound to be true of most places. Here are some of her tweets from the driver’s seat for three days this week (16th – 18th) on the topic of cars in priority lanes:

Hmmm, is @bustration simply unlucky? Perhaps she’s just a glass half-full sort of a person? Or are her observations highly suggestive evidence that there’s a very serious problem with enforcing the rules on priority lanes? It’s odd how as a society we’ll spend billions in capital but then skint on making sure it can deliver to specification.

@bustration’s frustrations are an example of how smartphones and Twitter have lowered the costs of monitoring and information collection. Perhaps right now someone is building a ‘name and shame’ web site where disgruntled travellers can share pics of priority lane parkers. Or maybe somewhere in government there’re Twitter Analysts who’re already on to it!

Here is a selection of more @bustration’s tweets from earlier in May (I’ve selected from those that relate to public transport – there’re other tweets on less gloomy topics): END_OF_DOCUMENT_TOKEN_TO_BE_REPLACED

Are our local shopping centres doomed by technology? 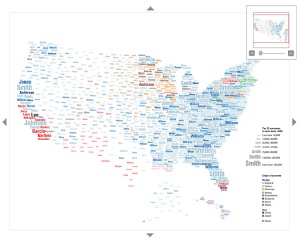 In an interesting article on Crikey, Guy Rundle riffs off the Borders bankruptcy to ask if technological change will inevitably destroy local strip shopping centres:

The whole centrality of the shop is changing. It is no longer a necessary place, and so the high street no longer acts as the spatial core of a community. At some point a whole series of mainstream shops will succumb to insufficient, intermittent demand. Everyone will want to know they are there, but no-one will use them enough.

Whether Borders succumbed to poor management, competition from e-commerce, the dead hand of the parallel importing restrictions, or the fall-off in consumer spending, there’s no question that the nature of shopping is changing profoundly.

For example, I bought my first lot of ten novels from Amazon back in 1994 and have purchased many more books from various on-line retailers since. Whenever I have the option, I now download e-books to read on my e-reader in preference to hard copies.

I started home-banking in 1994 and now visit the bank maybe four times a year max (I hate being paid by cheque!). My wife and I have bought so much stuff on eBay we have Turquoise Star status. The household increasingly downloads movies via T-Box rather than hire DVDs and all our music is purchased through iTunes. We book our travel on-line and even negotiated the purchase of a car over the net.

Guy Rundle foresees that these sorts of changes will extend to the local supermarket and beyond, driven by improvements in on-line ordering and home delivery. I expect that once the public has confidence the problems with e-commerce – like affordable and secure home delivery and safe payment systems – have been overcome, many people will surely choose to use their time for higher value activities than routine consumer shopping.

Mr Rundle fears that if the boring but essential services like supermarkets are lost to the high street, then specialist stores like bookshops that rely on passing trade from ‘anchor tenants’ will also go under. He says:

The wider question, in terms of future life, is how we will sustain any form of public spatial life at all – as the last shared, necessary space dissolves

I don’t think the high street is in any imminent danger. It’s likely to change but I doubt it will die. Not all the changes will necessarily be bad. END_OF_DOCUMENT_TOKEN_TO_BE_REPLACED