← How dense are Melbourne’s outer suburbs?
Melbourne’s trains from the air →

One argument against suburban sprawl is that it sterilises agricultural land. A particular variation on this contention is that land should be preserved for agriculture so that carbon emissions in transporting food from farm gate to plate – “food kilometres” – can be minimised.

A frequently cited estimate is that food in the US travels on average 2,400 km from where it is produced to where it sold to consumers. We should therefore seek to grow as wide a range of food as possible as close to Melbourne as possible. 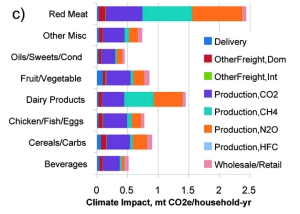 From Weber and Mathews, Food Miles and the Relative Climate Impacts of Food Choices in the US

All things being equal that makes sense. But of course it’s never that simple. Here are some pertinent issues to consider.

Second, most food can’t be grown locally without resorting to potentially environmentally damaging practices like excessive application of fertiliser, irrigation or artificial heating of greenhouses. This article cites a British study which found that because British tomatoes are grown in heated greenhouses, they emit 2.4 metric tons of carbon dioxide per ton grown whereas Spanish tomatoes emit 0.6 tons. Further:

Another study found that cold storage of British apples produced more carbon dioxide than shipping New Zealand apples by sea to London. In addition, U.K. dairy farmers use twice as much energy to produce a metric ton of milk solids than do New Zealand farmers.

Third, even where the local area is suitable for growing certain foods, it might not be the most “environmentally efficient” location for a particular food. For example, the impact on the environment of growing tomatoes in a more distant location might be lower than it is locally because the former has more hours of solar energy (sunlight), or higher rainfall or soil that requires fewer additives.

Fourth, producers in more distant locations might have superior farming practices to local growers. They might, for example, husband the land or protect biodiversity with greater care.

Fifth, the environmental and economic cost of moving people is higher than the cost of transporting their food. To the extent that some proportion of residential growth occurs on the fringe (and even Melbourne 2030 anticipated that proportion would be 30% of all commencements), it is accordingly preferable where there is a conflict with farming to give housing priority.

In short, “food kilometres” tells us how far food has travelled but little about its effect on the environment. The way to minimise the environmental impact of the food production chain at the personal level is to think primarily in terms of what you eat and how it is produced rather than in terms of “food kilometres”. These researchers illustrate the importance of what you eat:

Dietary shift can be a more effective means of lowering an average household’s food-related climate footprint than “buying local.” Shifting less than one day per week’s worth of calories from red meat and dairy products to chicken, fish, eggs, or a vegetable-based diet achieves more GHG reduction than buying all locally sourced food.

Yes, all other things being equal, it is better to buy local, but proximity is likely to be only a very small part of the environmental benefits that come from eating wisely.

Suburban sprawl already has enough real downsides without it being necessary to exaggerate the issues associated with agricultural land. Agriculture in Australia is in little danger from urban encroachment – the total area of land used for urban development in Australia is equivalent to less than 1% of all land used for farming and the productivity of agriculture has doubled over the last 30 years.

In any event it is interesting to note that some key agricultural areas within Melbourne’s border are “spared” from urban development. Lettuce and broccoli are grown in large quantities in the 3,000 hectare Werribee Irrigation District (it produces 70% of Australia’s lettuce) using recycled water pumped from the Western Treatment Plant and the Werribee River. The largest cattle farm in Victoria, where cattle feed on grass that is flood-irrigated with recycled water, is located on the Western Treatment Plant – it grazes 15,000 cattle and 40,000 sheep. This doesn’t mean however that they are necessarily the best options for reducing the food footprint of Melburnians – farmers in the Irrigation District have long been accused of exhausting the soil of nutrients and of relying excessively on fertiliser.

UPDATE: I’ve looked at the impact of sprawl on agricultural land here.