← W Class trams – is this a great opportunity?
Are Melbourne’s trains really getting safer? →

How much carbon are the candidates emitting? 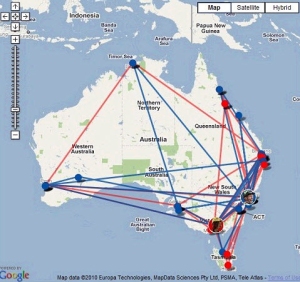 Crikey’s Election Tracker reported today that Gillard has so far flown 39,431 km during the campaign and Abbott has flown 40,800 km.

I thought I’d take a ‘ballpark’ look at the carbon emissions associated with that travel.

For simplicity, I’ll assume they both flew all those kilometres in a standard jet such as a 150 seat Boeing 747 400. If I also assume a relatively high load factor like commercial carriers typically achieve, then Gillard’s personal carbon emissions so far are of the order of 6.2 tonnes and Abbott’s 6.4 tonnes (I’ve assumed 158g/passenger km, but there could be considerable variation depending on type of aircraft, load factors and distance. I’ve made no allowance for the altitude of discharge, so I’m treating this as a simple “order of magnitude” estimate) .

At the rate of around $25/tonne propounded by the Greens, they could each offset their personal emissions on the international market for little more than $150.

Of course the candidates usually travel with a retinue of staffers and press. If we assume all that flying was done with an 80% load factor, that means Team Gillard has generated around 743 tonnes of carbon so far and Team Abbott has generated 769 tonnes. Both teams could offset that for less than $20,000 each.

I’ve not travelled on a plane with a campaigning Federal politician but I doubt they have those sorts of load factors on Government or chartered planes. I suspect the emissions of the candidates and their retinues could be much higher.