← Do we spend too much time commuting?
Are the suburbs dormitories? →

Should bicycles be registered? 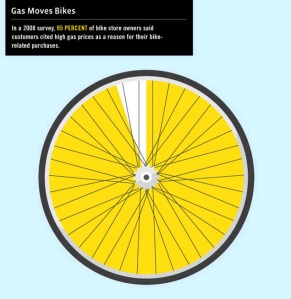 The Victorian Employer’s Chamber of Commerce and Industry (VECCI) reckons bicycles should be registered and cyclists licensed.

VECCI’s recently released Infrastructure and Liveability policy paper, which is intended to influence public debate in the lead up to this year’s state election, argues that “road users should be treated equally. For example, all road users, including cyclists, should be licensed and vehicles registered”.

There are four key arguments commonly advanced against compulsory registration.

The first is that registration, as it is traditionally understood, is a charge for road damage, which rises exponentially with axle load. Since bicycles are extremely light compared to cars and trucks, the amount of damage they do is inconsequential.

The second is that fees for compulsory third party personal insurance are collected as part of the registration process. Again, bicycles are so light that the likelihood of cyclists seriously injuring other road users is very low (although they might injure themselves).

The third argument is that the scope for “incentivising” cyclists to obey the road rules via registration is limited. The main offence committed by motorists – speeding – doesn’t apply to most cyclists. They don’t avoid tolls because they’re not permitted on freeways and they don’t do a runner at petrol stations. Some might get picked up running red lights but not enough to justify the administrative cost of registration or the inconvenience of arming bicycles with legible number plates.

Finally, it is contended that cyclists impose very low, even zero, costs on the environment compared to motorised vehicles. Accordingly, they should be exempted from registration charges.

But while there is substance to all these arguments, I suspect VECCI might argue that there are more costs involved in providing and maintaining roads than just those that derive from axle loads. The weight of a vehicle might not be a particularly good way of capturing the full extent to which different vehicles use roads. Since cyclists do use road space and to some extent impose costs on other road users, the argument would be that they should pay their way.

It’s probably also not helpful to run environmental impact and charging for road space together. The former should be addressed by charging all road users, including drivers and cyclists, the real costs they impose on the environment and on other road users. Under such a policy cyclists would pay virtually nothing. But where cyclists use road space that should be paid separately.

But having said all that, I’m not sure that the cost of road space occupied by cyclists is all that significant. My feeling is that it would not be high enough to justify the undoubtedly large administrative expenditure that would be required to set up a compulsory registration system. And registration implies that bicycles would have to be identifiable in some way, leading to higher administrative costs for the provision of something like a (wind-dragging) plate legible on a camera.

I’m more kindly disposed to the idea of licensing cyclists (rather than bicycles) as I think increasing on-road use requires that cyclists understand the road rules better. I also think it would have value in convincing motorists that cyclists are legitimate road users. But once again, the administrative costs seem too large to justify such a move.

9 Comments on “Should bicycles be registered?”