Do employers encourage too much driving? 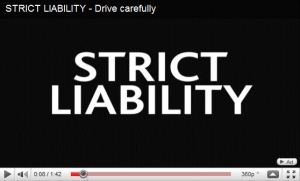 Guess who is at fault in bicycle-car smashes in The Netherlands?

Monash University’s Professor Graham Currie is quoted in The Australian (6 October) as arguing that employer subsidies for staff car parking should be removed:

When buildings go up in cities, the parking component is about 37 per cent of the total cost. Is that cost passed on to the people who use it or borne by society as a whole? I can tell you it’s the latter because most car commuters don’t pay their own parking; their employers do. The costs of this ‘free parking’ flows through into the price of goods and services, so we are all in effect subsidising the car owners who drive into the city. Traffic congestion in Australian cities is unlikely to diminish because so many car commuters don’t pay their own parking bills

The Victorian Employer’s Chamber of Commerce and Industry (VECCI) has hit out at Professor Currie, arguing that many employers offer subsidised parking as a way to woo workers to city jobs where it is otherwise inconvenient or untimely to use another transport method, like the train or bus:

The way to lessen inner city congestion is not to restrict choice but to increase it – making it more attractive to travel on trains, trams, buses or to walk/ride. Ultimately employers should retain the freedom to offer whatever incentive it deems it requires to lure the best calibre of workers to its business.

I don’t buy VECCI’s line about not restricting choice, but I agree entirely that employers and their staff should generally be free to negotiate whatever lawful remuneration packages they want. However I think it’s an entirely different matter if those packages are underwritten by tax payer subsidised car use. END_OF_DOCUMENT_TOKEN_TO_BE_REPLACED