← Is Melbourne the 2nd most liveable city in the world?
What can Sydney teach us about airport rail lines? → 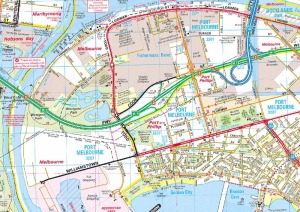 The Minister’s claim that the project will focus on “more affordable” housing also seems ambitious.

This is a premium location close to the CBD and the beach. Retrofitting infrastructure will be expensive. It’s inevitable the housing will be priced well out of the range of average income earners and the great bulk of first home buyers.

There’s scope for some subsidised housing but there are limits to how much concentration is appropriate for the tenants, how much their owner-occupier neighbours will accept, and how much governments and developers are willing to pay.

However if by ‘affordable’ the Minister means housing that is within the reach of middle class buyers and not solely the preserve of the very rich, then the frequent calls for a low rise development need to be resisted.

Fishermans Bend is a rare opportunity.  Apart from its locational advantages, the large lots mean land assembly will be easier than elsewhere in the inner city and the relatively small numbers of existing residents mean less potential for conflict. This is an argument for more density, not less. It’s an opportunity to make up for the many restrictions on density elsewhere in Melbourne and go for significantly more dwellings that Ms Cunich envisages. 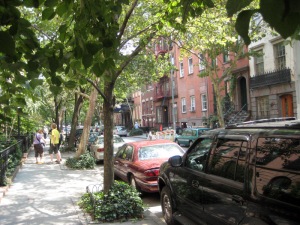 Population density should accordingly be maximised – consistent with market conditions and good design practice – so that the best use is made of this precious asset. That might involve a mix of developments at different densities with a range of building heights. It should look more like Manhattan (but without the car vs pedestrian conflict) than Carlton.

The fear that anything other than low-rise will unavoidably end up like Docklands is misplaced. Sure, Docklands provides important lessons, but there is no logical and necessary connection – much less inevitability – between what happens in Fishermans Bend and how Docklands was handled. There are other, more successful higher density projects which are just as relevant. In any event Dockland’s failings aren’t due to excessive density.

There are also a number of issues with Fishermans Bend that will need to be considered carefully, as I pointed out here. They include the value of the area for industry and possible contamination of the land. Obviously there will need to be good infrastructure, services and urban design.

But a key element that so far is missing is the strategic vision for Fishermans Bend. I don’t so much mean what it looks like, I mean how it will fit in with whatever the new Government’s vision is for the entire metropolitan area. What will its role within the entire urban system – the metropolitan economy – be?

Is it, for example, to be predominantly residential (as the term ‘growth area’ might be taken to imply), or is it also to be a major employment centre? If it were, for example, the latter, this could have significant implications for the functioning of activity centres in the suburbs.

It is vital that the Government comes to terms with the ‘bigger picture’ for all of Melbourne before it goes too far down the road with Fishermans Bend. 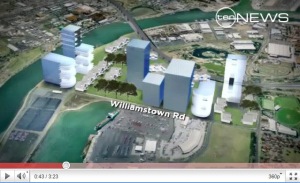 Update: Here’s a video report by Channel TEN. It indicates the area under consideration is the western end, south of the freeway and north of Williamstown Rd (shown as Port Melbourne on the Melway – see map).

I think this is Port-owned land but I measure it as only around 70 Ha (using GIS software). The video has an animation (presumably prepared by the Government?) of what the development might look like – not really the five or six storey buildings mentioned by the Premier in the report. Lots of emphasis on noise. 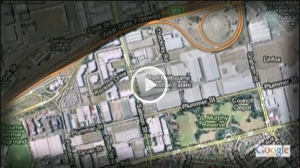 Then again, this video by The Age suggests the area under consideration is further to the east, although still south of the freeway (the Minister makes it clear the area north of the freeway is not part of the current proposal).

Some clarification of the general area under consideration would be helpful.

13 Comments on “Will redevelopment of Fishermans Bend really be ‘revolutionary’?”