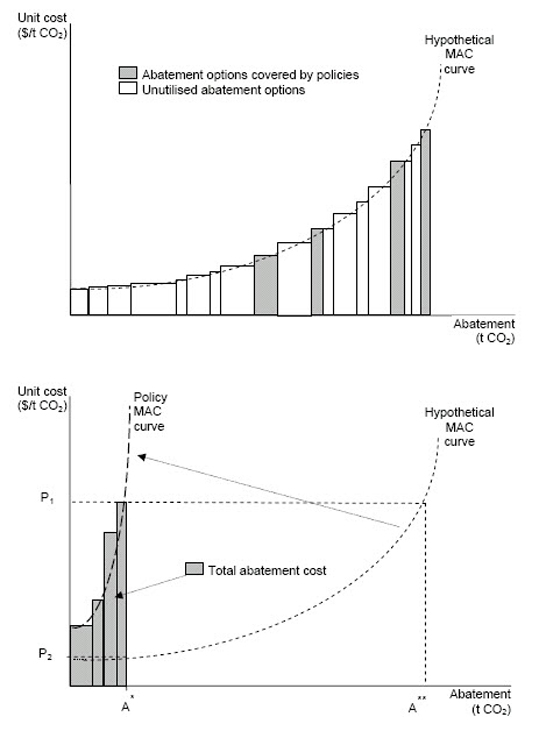 The Productivity Commission’s new research report, Carbon emission policies in key economies, has important implications for the way emissions are managed, but it also has some key lessons for urban and transport policy (and other areas of policy, for that matter).

The report should remove any doubt that a price on carbon is far and away the most efficient and least-cost means of reducing emissions. The report’s findings are damning of so-called direct action policies and make it clear that “the abatement from existing policies could have been achieved at a fraction of the cost” if a carbon tax or emissions trading price were in place.

But here’s the money shot – the Commission calculates that the same level of carbon abatement produced by these supply side measures could have been obtained with a $9/tonne price on carbon! The report goes on:

This equates to about 11 per cent of the almost A$500 million estimated cost of the existing policies. Alternatively, for the same aggregate cost, more than twice the abatement could be achieved. One of the reasons an explicit carbon price would be expected to be more cost effective at such low levels of abatement is that, as modelled, it captures a considerable amount of low-cost abatement on the demand side.

The research also examined the use of bio-fuels in the transport sector. The implicit cost of carbon abatement from existing bio-fuels programs, both in Australia and overseas, is much higher than it is for electricity generation. The Commission estimates the cost of programs in Australia is $364/t CO2 but it is $600 – $700/t CO2 in Japan and the USA. It’s estimated that it is costing $6,105 to abate a tonne of CO2 in China using ethanol.

The accompanying exhibit illustrates notionally how Australia – and the other countries examined by the Commission – are tending to favour high cost abatement initiatives (the shaded bars) and ignore others that cost less per tonne and mostly yield more abatement.

Regrettably, there are many parallels with the way we go about designing policy for our cities. For example, I think it would be much more cost-effective to abate carbon (or reduce oil consumption) in the urban passenger transport sector by introducing policies such as road pricing or more fuel-efficient vehicles, than it would be to (say) build a rail line to Doncaster. Or, were the objective to increase the mobility of those without access to a car, spending funds on buses and better service coordination rather than on extensions to the rail network, would give a more cost-effective outcome.

The good news though is there might be grounds to be optimistic that PV module prices are starting to fall.