How much time do Melburnians spend commuting? 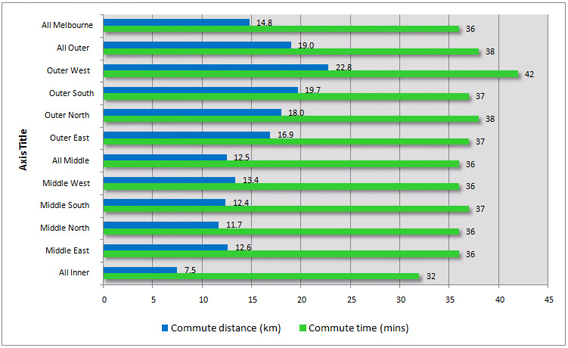 On average, workers who live in the outer suburbs commute 2.5 times further to get to work one-way than their counterparts who live in the inner city. That’s in terms of distance – probably no surprises there. However what’s not always appreciated is the extra time they spend commuting isn’t that much more – only 19% more than inner city commuters.

Since fewer than 10% of Melbourne’s workers live in the inner city (approx 5 km radius around the Melbourne Town Hall), what’s more pertinent is the average commute times of the more than 90% who live in the middle and outer suburbs. Their commutes don’t vary much – the average middle ring worker commutes for 36 minutes, the average outer suburban worker for 38 minutes. That’s just 5% more.

There’s not even a lot of variability within the suburbs either. Outer-West commuters average 42 minutes – the longest of any sub region – while the shortest commutes are enjoyed by workers resident in the Middle-North and Middle-East sub regions, who average 36 minutes. Only six minutes less.

This data is taken from Research Report 125 recently released by the Bureau of Transport, Infrastructure and Regional Economics (BITRE) – see exhibit. BITRE largely relied on data from the Vic Department of Transport’s VISTA survey. See also my earlier post on changes in commuting distances over 2001-06 (unfortunately BITRE doesn’t analyse the trend in commuting time).

The spatial regularity in the time workers devote to commuting is consistent with the idea that, on average, travellers budget a relatively fixed amount of time for travel (see here for more on travel budgets). Workers living in the inner city spend almost as much time travelling shorter distances than suburban workers because the former travel at considerably slower speeds, reflecting high levels of traffic congestion in the inner city, higher use of public transport and more walking and cycling.

At the metropolitan level, 40% of workers spend less than 30 minutes getting to work one-way and 61% less than 40 minutes. However there’s a tail of long distance commuters – 17% spend more than an hour commuting one-way. I don’t have data on this 17%, but since the average commute by public transport in Melbourne takes almost twice as long as the average car commute, I suspect many of them are train travellers (I hope to get some data on this).

The numbers in the exhibit are the result of a long-standing trend – improvements in transport infrastructure lead to higher speeds, giving residents the opportunity to increase the distance between work and home but still get there in much the same travelling time. Residents may either move house or move job, or both. This happens with both private and public transport improvements.

So the ‘headline’ implication is that, in general, improvements to infrastructure will very probably result in people travelling further to work. Where that is primarily by car it’s likely, given the technology of the existing vehicle fleet, to lead to higher resource use, more traffic congestion and make greater demands on the environment. There might be exceptions, but in general that’s what we should expect, especially given that all modes are under-priced. It’s worth noting that jobs also move outwards. END_OF_DOCUMENT_TOKEN_TO_BE_REPLACED