END_OF_DOCUMENT_TOKEN_TO_BE_REPLACED

-Are there really limits to what planning can do?

States' and Territories responses to 23 land use planning 'challenges'

There are, but in Victoria those limits appear to be very elastic.

Because it controls the use of land, the whole complex edifice of planning regulation touches to a greater or lesser extent a lot of the things we do.

In a newly released report commissioned by COAG, the Productivity Commission gives us an insight into how the nation’s planning agencies think the land use control system influences our lives.

The report, Performance Benchmarking of Australian Business Regulation: Planning, Zoning and Development Assessments, examines the regulatory frameworks of each jurisdiction, the processes for supply of land, the bases for assessing developer contributions, compliance costs for business, and competition issues arising from planning decision-making.

As part of its investigations, the Commission asked each State and Territory to answer this question: “To what extent can government use the planning, zoning and DA system to positively influence the following challenges”?

The answers each jurisdiction provided to 23 “challenges”, graded from “no effect” through to “major effect”, are shown in the accompanying chart (copied from the report). The survey was completed between October and November 2010, prior to the Victorian State election.

Bear in mind that the survey relates specifically to the powers of land use planning agencies i.e. not transport or other agencies. Also, the planners were specifically asked about the scope to positively influence each of the challenges. There are some interesting claims here and some equally interesting comparisons between States and Territories.

There’s a consensus that, given (presumably) the right policies, land use planning can have a major positive influence on managing greenfield development, accommodating population growth, managing the transition to higher population densities, providing diverse/appropriate housing, and protecting biodiversity.

By and large I’d agree with that. My only caveat would be the understanding that some of the benefits will come from reducing rather than increasing the degree of planning intervention. A prime example is the many restrictions on constructing higher density housing within established urban areas.

Where the survey gets really interesting is outside these five key areas. Victoria in particular stands out from its peers. END_OF_DOCUMENT_TOKEN_TO_BE_REPLACED 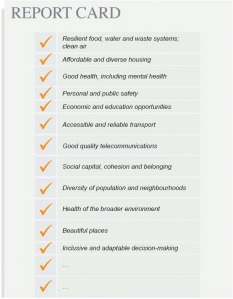 A standard objective these days in high-level city strategic plans is greater diversity. It’s mentioned, for example, in Melbourne 2030, in the Committee for Melbourne’s Beyond 5 Million and in The Grattan Institute’s The Cities We Need (see graphic).

The Grattan Institute says diversity is important because “many economists think that mixing of ethnicity, age, culture and education is important for a modern knowledge economy, in order to stimulate and disperse ideas”.

But according to Dr Andrew Leigh, it’s not necessarily all mother’s milk, at least in relation to ethnic diversity (which is what most discussion of diversity in Australia is about). In his new book on social capital, Disconnected (which I’ve discussed before), he points out that there is a negative correlation between trust and ethnic diversity:

Residents of multi-racial neighbourhoods are more likely to agree that ‘you can’t be too careful in dealing with most Australians’. In particular, neighbourhoods where many languages are spoken tend have lower levels of trust…

This accords with the findings of a succession of studies of ethnic diversity in the US and other countries. We will have to work harder, Dr Leigh suggests, if we are to make Australia both diverse and high trust.

Let me emphasise that Dr Leigh, who is the new ALP member for Fraser in the ACT and until the last election was a Professor of economics at ANU, is a supporter of immigration:

A spate of studies suggest that continued high levels of immigration will most likely bring a raft of economic and social benefits to Australia. But we should not gild the lily. Most likely, higher diversity will lead to lower levels of interpersonal trust…..the challenge for policymakers is how to maintain the current levels of  immigration while mitigating the impact on our social and political fabric.

But how do you mitigate that impact? Most city policy documents don’t even acknowledge that there might be potential downsides to ethnic diversity. Nor do they usually specify what the spatial dimension is, much less what specific policies ought to be pursued. END_OF_DOCUMENT_TOKEN_TO_BE_REPLACED