Is the urban fringe getting bigger?

The proportion of new dwelling commencements planned for the outer suburban growth areas increased sharply between the release of Melbourne 2030 in 2003 and the release of the revised strategy, Melbourne @ 5 Million, in October 2008.

Melbourne 2030 envisaged 31% of dwelling starts would be located in the growth areas over the period to 2030 (page 30). It expected virtually all the rest would be located within the established suburbs, either clustered around major activity centres or dispersed across the suburbs. 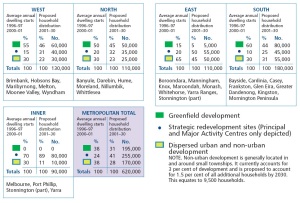 The subsequent update, Melbourne @ 5 Million, made a dramatic change. It increased the proportion of dwellings expected to be constructed in outer suburban growth areas to 47% – half as much again as envisaged by Melbourne 2030 (page 3).

This change was consistent with the reality of what was happening in the market.

However four years is a short period to use as a basis for policy. As it happened this was a relatively quiet period compared to the boom that followed. END_OF_DOCUMENT_TOKEN_TO_BE_REPLACED