Were those the good old days? 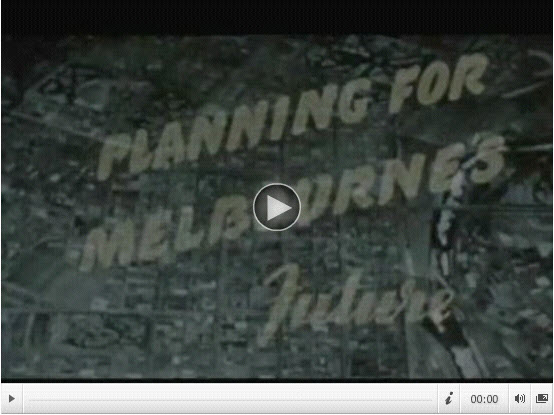 Here’s a fascinating look back to what planners (the MMBW) were thinking about Melbourne’s future nearly 60 years ago. In some ways not much has changed – like many contemporary planning proposals, this is propaganda but in those days they didn’t bother with thin disguise. I like the ending: “will it achieve your support?”.

It seems that even as long ago as 1954, workers were spending two hours a day commuting and not only were roads congested but so were trams and trains!

The founders of the city could not visualise that one day workers who could walk to their jobs would spend more than one hour each day getting to and from their place of work, that trams would be unable to handle the peak hour crowds, that trains would become hopelessly inadequate for the handling of the enormous flow of commuters into and away from the city, and that with the coming of the motor car the original wide streets would become incapable of handling the ever increasing traffic flows”.

I’m surprised the introduction shows old buildings like Parliament House rather than new ones. After all, this was the new world of modernism and Robin Boyd’s famous attack on Austericanism – the “imitation of the froth on the top of the American soda-fountain drink” – was a mere three years away.

I’m also somewhat surprised that even as late as 1954 the CBD was seen as sucking the life out of inner city retail strips – presumably places like Smith Street – and the inner suburbs were in turn being invaded by industry:

As the city centre has grown in importance, many old shopping centres have declined and the living conditions in many of the surrounding suburbs have deteriorated. Industry had expanded into them and people have moved farther out to live. This has often resulted in an undesirable mixture of shops, houses and factories and the growth of slum conditions END_OF_DOCUMENT_TOKEN_TO_BE_REPLACED