Does concern for the environment drive public transport patronage growth? 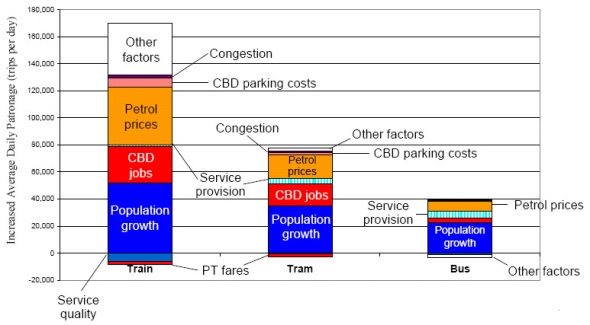 According to a recent paper, research by the Victorian Department of Transport (DoT) suggests concern for the environment and a healthy lifestyle is a key driver of the recent surge in public transport patronage in Melbourne.

DoT initially concluded that the primary drivers of growth over the period 2002-07 were population growth, higher petrol prices and growth in CBD jobs (see exhibit). Neither traffic congestion nor public transport service quality appeared to play a significant role.

However a large proportion of the patronage increase on trains – equivalent to about 40,000 extra daily passengers – was not explained by the variables and/or the elasticities that DoT assumed in its modelling. This unexplained increase is labelled “Other factors” on the exhibit.

Some research undertaken by Dot and Metlink suggested it might possibly relate to attitudinal factors. Of the top eight reasons given by respondents for reducing their vehicle use, environmental concerns and health & fitness ranked equal second behind petrol prices, but ahead of parking costs.

Public transport lifestylers (19%) – “Using public transport as much as possible is just the right thing to do. Apart from being a part of my basic day to day life, it has the advantage of being better for the environment when compared to other transport modes”

Car works for me (16%) – “Car is the most convenient and useful way for me to get around. It’s not that I have a big problem with public transport; it’s just that it doesn’t suit me as much”

Agnostics (15%) – “I’m just not all that interested in the matter of how I get around. Some people are car people and some like public transport, but I’m not overly fussed either way. If you changed the public transport system, I probably wouldn’t even notice”

Convertibles (15%) – “I use my car mainly but am actually pretty open to using public transport more….but it will need to improve before I do”

Thus according to this research, nearly a fifth of Melburnians are now Public transport lifestylers who “align themselves with public transport due to a strong belief in environmental and sustainability issues, as well as a desire to live a healthy lifestyle”. What’s surprising is that all six segments have almost no (significant) relationship with age, gender, income, education or distance from the CBD e.g. the large Lifestylers segment is not just made up of inner city Greens voters.

While respondents in this segment don’t necessarily all use public transport, the paper concludes that “the results strongly point to attitudinal change having played a significant role in recent patronage growth”.

I’d like to, but I don’t buy the implication that this attitude is a major independent driver of patronage growth. My interpretation is that there’s a cluster of people who have green attitudes and not surprisingly also have a positive attitude to public transport. But I don’t think they’d use public transport in significantly greater numbers if it took longer or was more expensive than the alternatives. They’d use public transport for the same reasons most people do – because for some trips it’s cheaper and/or faster than the alternatives. END_OF_DOCUMENT_TOKEN_TO_BE_REPLACED