Melbourne’s peak train services are overcrowded and have been for quite a few years. Given the high costs that peak period commuters impose on the rail system, wouldn’t it be more efficient and more equitable if they paid more for their tickets?

After all, the capacity of the system is determined by peak demand – all those trains and the associated infrastructure and personnel required to handle the peaks are under-utilised or sit idle for the rest of the day and on weekends. 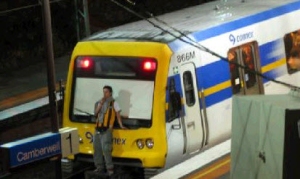 Too crowded to get a seat?

As would be the case with congestion charging on roads, a charge on peak hour train travellers should reduce over-crowding (congestion) by suppressing travel, moving lower value trips to off-peak periods and encouraging shifts to other modes. Passengers who continued travelling in the peak would make a larger contribution towards what it actually costs to get them to work.

I’m prompted to think about this issue by a proposal to levy a $0.50 per trip surcharge on customers of Washington D.C.’s Metro system who use or pass through the network’s busiest stations during the busiest period of the peak. If approved, the congestion toll would apply from next month. END_OF_DOCUMENT_TOKEN_TO_BE_REPLACED