More on My School

Following up on my comments about My School on 5 March, Limitations of My School, there is great post by Sam Wylie on Core Economics today, School performance data. While he doesn’t address my issue of concern (the accuracy of the social profiling methodology used for comparison purposes), he makes a number of other good points. In particular, I thought his closing, where he addresses the issue of league tables, was well put:

“In the matter of school testing there is always the presentation of an argument that parents and the press will not interpret the data correctly.  The people can’t be trusted.  How often does that idea come up in different spheres?  We shouldn’t devolve power or information to individual households because they cannot be trusted not to abuse it.  Those types of arguments are always based on the protection of private interest (teaching unions) or elitism”.

The jobs are already in the suburbs

There was another good story published in The Age yesterday as part of the continuing series, Project Melbourne: Towards a Sustainable City. Titled The Great Divide, it compares living in a CBD apartment with outer suburban living.

However there is a point where the writer, Julie Szego, goes too far. She contends that outer suburban living “depends on jobs becoming a reality. If jobs don’t come to the suburbs, roads will remain choked and families time-poor”.

The idea that there are few jobs in the suburbs is a common misconception with important policy implications. 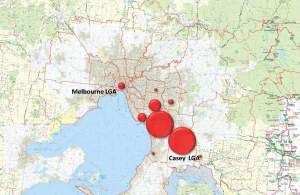 And these aren’t all low-skill, low-pay jobs either. The majority of jobs in Melbourne occupied by graduates are located more than 5 km from the CBD.

This misunderstanding of the geography of employment is also displayed in the first feature written for The Age’s current Project Melbourne series. That article, titled The Outer Limits, made the claim that “of those jobs that are available (in fringe suburbs), a higher percentage are blue-collar”.

The idea that suburban jobs are mostly in low skill occupations seems to be another popular misconception.

In fact, only 9% of jobs located more than 40 km from the CBD are in the Manufacturing sector, compared to 14% for all of Melbourne. If the definition of blue collar is extended to include jobs in the Wholesale, Transport and Construction sectors, the respective figures for the fringe and metropolitan area are 26% and 31%. What the fringe areas actually do have is a higher proportion of jobs than the metropolitan average in the high-skill education and health sectors.

It is not in any event clear why having more ‘blue collar’ jobs would be a disadvantage compared, say, to having an over-representation of retailing jobs. Many jobs in the modern Manufacturing and Construction industries are highly skilled and involve interacting with complex technologies and systems.

The main issues associated with employment in Melbourne can be explored in this presentation I gave last year at a cultural industries seminar at Qld University of Technology, Jobs in the Suburbs.

The contention in Julie Szego’s article that outer suburban roads are “choked” probably depends on one’s definition of what constitutes congestion. Most outer suburban residents travel locally – for example, 70% of trips by residents of the City of Casey are to destinations located in either Casey itself or the adjacent City of Cardinia (the corresponding figure for Cardinia is 83%). END_OF_DOCUMENT_TOKEN_TO_BE_REPLACED