← Get a ‘ticket’ for not speeding
Get social to increase density →

Energy efficiency in transport – some surprises!

The latest edition of the Transportation Energy Data Book: Edition 28 was released last year by the US Department of Energy (Office of Energy Efficiency and Renewable Energy).

I’ve derived the accompanying graph from Chapter 2 of the report. There are a couple of points of interest here.

In particular, the data shows that load factors are very important. Although public transport is more energy efficient than cars when it is fully loaded, it has to operate at off-peak times and on secondary routes, when patronage is low. 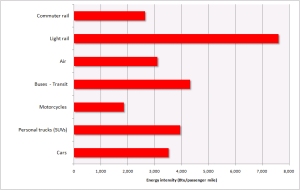 The impact of this ‘burden’ is clearly shown in the data on transit buses, which are actually more energy intensive on average than cars or even SUVs. This is partly because buses are relatively inefficient (they consume a large amount of energy relative to their maximum capacity compared, for example, to trains) but primarily because their average load factor is just 9 persons/vehicle. The latter is in large measure due to buses being the mode of choice for servicing marginal routes and schedules. This is not an inherently US problem – it also applies to Victorian buses and British buses.

Commuter rail in the US is much better than buses but is still only a third less energy intensive than a car. That’s clearly better, but the margin is not decisive. The gap could easily be closed by a shift to more fuel-efficient cars. This is plausible – the average fuel efficiency of cars in the US fell from 9,250 Btu/vehicle mile in 1970 to 5,517 Btu in 2007.

A real surprise here is light rail, which is about twice as energy intensive on average as cars and SUVs. However the average masks considerable variation between cities. Light rail in both San Diego and Portland, for example, consumes around 2,500 Btu/passenger mile whereas there are four systems (North Little Rock, Memphis, Kenosha, Galveston) that use more than 10,000. Galveston burns up a whopping 30,000 Btu’s for each passenger mile.

There are doubtless many factors that explain this outcome (the Data Book offers no help, it literally is just data). My guess is much of it is because the poorer performing systems are old and also don’t serve commuters well – perhaps commuters moved to different suburbs long ago or the city centre lost jobs. The better performing systems on the other hand appear to be newer ones that are more likely to have been located in places where commuters live and where the CBD is flourishing. Another relevant factor is the source of energy – while San Francisco’s light rail system consumes almost 5,000 Btu/passenger mile, more than half the energy comes from non fossil fuel sources.

It should be no surprise that the Los Angeles system is among the more energy efficient light rail operations in the US. The city has spent $11 billion on five new rail lines and now has one of the most extensive light and heavy rail systems in the country. Although rail captures only a fraction of all travellers, the large population and high (average) density of LA probably help it achieve higher load factors.

On the other hand, the relatively low energy intensity of aeroplanes probably does surprise many people. It is partly because the efficiency of domestic aircraft has improved significantly over the last 40 years, falling from 10,115 Btu/passenger mile in 1970 to 3,153 in 2007. In addition, a singular advantage planes have over other forms of public transport is planes don’t have to fly almost empty anywhere near as often – many services can be delayed (or cancelled!) until load factors are acceptable.

The real reason air travel is so bad for the environment is not because planes are inefficient but simply because trips by air tend to be very long compared to other modes.

3 Comments on “Energy efficiency in transport – some surprises!”