How to pay for public transport? 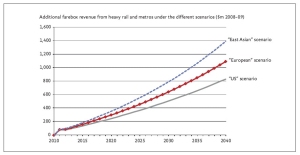 I was pleased to see the call earlier this week by The Age’s city editor, Jason Dowling, for tolling of roads to be introduced in Melbourne (Losing our way on roads).

He sees it as a way to reduce congestion and generate revenue for public transport improvements. Road pricing is something I’ve advocated on a number of occasions (here and here), but what particularly caught my eye in Mr Dowling’s article was his opening line:

“Everyone pays for public transport, first through taxes and then through fares, and it is time everyone had access to it, just as they do to roads”.

Few would disagree that Melbourne would be a more attractive place if it were as easy to access a train, tram or bus as it is a car. Somewhere along the line, however, the issue of cost has to be considered. Transport projects are very expensive. The State Government is spending about $2.5 billion on increasing the capacity of Victoria’s rail and road systems this year.

At that rate it will take many decades to improve the capacity of Melbourne’s public transport system. Just one project, the Regional Rail Link, is costing $4.3 billion in total and is only proceeding because the Federal Government is contributing $3.2 billion.

What is really needed is more revenue to fund more projects. There are others, but here’re two potential sources.

A comprehensive road pricing scheme that extracts the full cost of private travel would provide some of that revenue. The real value of congestion pricing lies in giving priority to high value trips but using the revenue for a transport-related purpose is almost certainly a prerequisite for obtaining public acceptance (see here).

That might best be achieved through the gradual introduction of a combination of higher fares (varying by time-of-day) and levies on both (a) central area businesses that benefit from the public transport system and (c) residential properties that are well served by public transport.

Some might argue that increasing fares would be a disincentive to use of public transport but the key is to increase simultaneously the cost of driving so that both modes are priced at social marginal cost. Higher road charges, fares and levies would of course need to be discounted for people with limited ability to pay.

These sorts of ideas would be difficult politically but they’re not entirely fantasy. The recent report of the Independent Public Inquiry into a Long Term Public Transport Plan for Sydney proposes a 30 year, $71 billion (capital and recurrent) program of mostly rail works to increase public transport’s share of all trips in the Sydney metropolitan area to around 25% (or possibly 35% – the report is ambiguous).

The Inquiry proposes to find part of the required funding by increasing fares and other charges to levels the community has indicated via surveys that it is prepared to pay in exchange for improved public transport services. It proposes that fares on all public transport modes in metropolitan Sydney be increased by 16% in real terms in the first year and by 1.3% in real terms each year for the succeeding 30 years.

The Inquiry also envisages increasing rates on all residential properties in metropolitan Sydney by an average of 20% and those on businesses by 15% to help fund the program. Further, it plans on imposing a $7.46 entry fee on cars entering the CBD, a $7.19 daily levy on parking and, in two of the scenarios considered, levying an additional registration charge of up $287 per vehicle.

These fares, levies and charges raise almost 80% of the required capital and operating costs for the ambitious program of works proposed by the Inquiry.

There’s already a developing momentum in favour of road pricing, supported by successful overseas precedents. The value of increasing public transport fares is less obvious. Perhaps the best argument is that public transport is likely to remain underfunded while ever it relies on public sector subsidies. Governments have no incentive to expand the system because all additions to the network increase the call on recurrent funds.

8 Comments on “How to pay for public transport?”