← Do school league tables add any value?
Why are we driving less? → 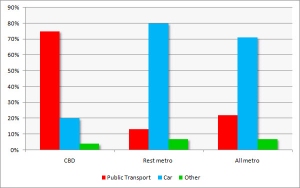 The paper analyses the journey to work in Sydney using data from the 2006 Census. It was undertaken by Blake Xu and Frank Milthorpe of the NSW Bureau of Transport Statistics.

Although the great majority of travel in Australia’s capitals is now undertaken for non-work purposes and is dominated by the car, the journey to work nevertheless remains an important travel purpose.
This is partly because it generates the largest peak in demand and partly because it is the one travel purpose where public transport’s mode share still remains relatively high.

The first chart shows that, as is the case with other capitals, public transport dominates commutes to the CBD in Sydney. It captures 75% of all journeys by Sydney CBD workers, whereas the car only gets 20%. That’s a bit higher than the other capitals but it’s an expected result. 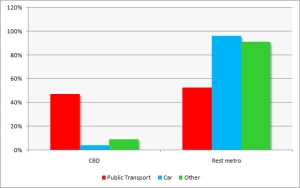 However what might surprise is that outside the CBD, public transport’s share is quite small. Only 13% of people who work elsewhere in metropolitan Sydney use public transport to get to work, while 80% drive.

When the CBD and the rest of the metropolitan area are taken together, the mode split for commuting for all of Sydney is 22% for public transport and 71% for car. Despite its high public transport share, the CBD has a small effect on the Sydney-wide average because it only has a small proportion of all jobs in Sydney – it accounts for just 14% of total work journeys.

Public transport patronage grew strongly in Sydney in absolute terms over 1981-06, but car use grew even faster. Transit’s share of work journeys fell from 25% to 22% over the period.

These numbers tell us that public transport is extremely important for the functioning of the CBD. Delivering large numbers of workers to the Sydney CBD in peak hour simply wouldn’t be possible without it.

This emphasises a point I’ve made a number of times before that concentration of activities – especially employment – is a key determinant of whether or not public transport wins a high mode share in Australia’s major cities.

Where the objective of policy is to increase public transport’s share of travel at the expense of cars, the primary focus of land use policy should instead be on concentrating activities spatially, particularly jobs. That strategy will create conditions conducive to transit and unsympathetic to cars.