← Should wearing bicycle helmets be voluntary?
– Is the new Population Strategy…. strategic? →

– Do governments spend too much on roads? 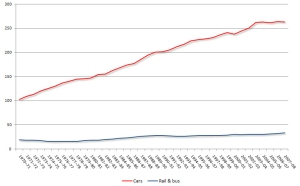 The Australian Conservation Foundation (ACF) got a lot of press recently with its claim that “governments across Australia are spending at least four times more on building roads and bridges than on public transport infrastructure“.

I agree with the ACF that more needs to be spent on public transport, but I don’t think the “roads vs public transport“ logic does justice to the complexity of the situation. There are a number of reasons why more public funds are spent constructing roads than rails.

One is that people drive much more than they use public transport. According to the Bureau of Infrastructure, Transport and Regional Economics (BITRE), Australians travel almost eight times as many kilometres by car as they do by bus and rail-based public transport. The money is going where the demand is. If you accept the ACF’s numbers, public transport is actually getting a disproportionate share of public construction expenditure. Roads are needed even if travel is confined to foot and horse-drawn vehicles. The Hoddle grid in Melbourne and the avenues and streets of Manhattan were designed before cars were invented – land has limited value if it can’t be accessed.

Another reason roads are important is for the distribution of freight within the metropolitan area. According to BITRE, the number of tonne kilometres of urban freight transported by road within Australia’s eight capital cities in 2007/08 was more than five times higher than it was in 1971-72. There is simply no practical alternative to road for tasks like restocking those hundreds of supermarkets that supply suburban households with food and household goods.

But most importantly, roads are also extremely important for public transport. For example, in Melbourne, the Doncaster Area Rapid Transit (DART) system, the Airport-CBD Skybus service, and the city’s three new orbital Smartbus transit services, all use buses. Because they use the existing road network, these systems do not require significant new land acquisition and construction. Some trunk lines might in time justify conversion to light rail services as patronage increases, but they too can use existing roads rather than require a dedicated right of way.

It is true that most cities in Australia have seen only limited rail construction in recent decades. For example, Melbourne’s suburban rail system was largely constructed in the nineteenth century and there hasn’t been a significant expansion in coverage since the 1930s. However in the future it is likely the largest gains in public transport use will come from using existing roads to provide bus services that “connect up” the system. This is partly because bus is the best technical and financial solution and partly because most employment is now in the suburbs. In Melbourne, for example, only 10% of jobs are within the Hoddle grid served by the loop stations.

The key priority for rail in a city like Melbourne isn’t new construction but rather improving reliability and increasing capacity on the existing network. Some new lines like the Regional Rail Link will be required to improve the functioning and capacity of the metropolitan rail system, but road-based modes that provide greater “connectivity” will generally provide a better solution to expanding public transport coverage than new rail lines. Unfortunately, Bus Rapid Transit (BRT) doesn’t have the same visibility as rail and isn’t counted by metrics like the ACF’s. The common view that only rail is “real public transport” leads to public pressure for very expensive but dubious projects like the proposed rail line from Melbourne’s CBD to suburban Doncaster to replace the existing (but brand new!) DART system.

Of course roads are also used by cars and that’s the root cause of their bad reputation. However cars are adaptable – manufacturers and consumers can respond to looming problems like peak oil, carbon emissions and pollution by shifting to alternative fuels and to smaller and more fuel-efficient cars. The really big economic costs associated with cars – congestion and accidents – could be reduced significantly by policies aimed at pricing road space and slowing vehicle speeds.

What’s really needed is a focus on public transport and on outcomes – and an agnostic view about modes.

8 Comments on “– Do governments spend too much on roads?”