← Can selection bias shoot down an argument?
What should be done with myki? →

Is Melbourne pushing the boundary (too far)? 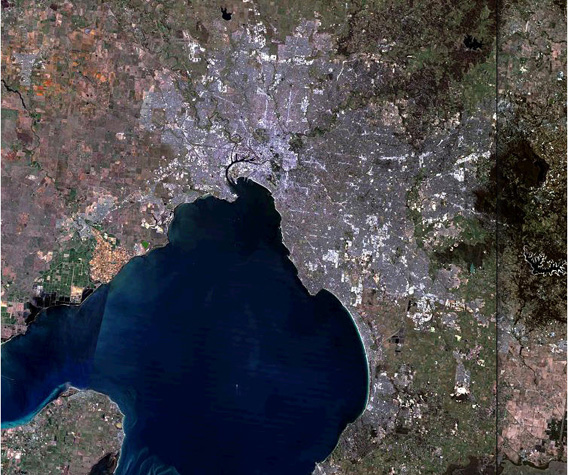 Geosciences Australia has released a new series of satellite images comparing the extent of development in Melbourne in 1988 with 2010. Click on the image above to go to Geosciences Australia’s web site where you can do a “swipe” comparison of the two images i.e. move the cursor across the image to progressively reveal the second image underneath.

According to a report in The Age, the images show a “massive” increase in urban sprawl, with Melbourne’s urban footprint surging to the north, west and south-east. Melbourne has “marched into surrounding rural landscapes” and its “unofficial boundary is now more than 150 km east to west”.

Melbourne has certainly expanded at the fringe over the last 22 years, there’s no doubt about that. However I’ve argued before that both the extent of sprawl and its downsides are routinely exaggerated, so I want to have a closer look at these images and at The Age’s interpretation.

One thing that struck me straight up is that any comparison of the two satellite images can be misleading unless the viewer appreciates Melbourne was still suffering the effects of a long drought in 2010 (compare the size of the dams in each year). So areas that appear to have gone from green to brown between 1988 and 2010 might reflect lack of rain, rather than an increase in development.

It should also be borne in mind that 22 years is a reasonably long period in urban development terms. We shouldn’t be surprised to see substantial change when a metropolitan area is growing. Have a look at these images to see how spectacularly some other growing cities have changed in the course of 20 years.

The level of growth also needs to be considered. Melbourne’s population grew from circa 3.1 million to around 4 million between 1988 and 2010. That’s an increase of about 30%, which is considerably more than the apparent increase in the size of the urbanised area. That’s to be expected, as a large proportion of population growth – currently approaching half – is accommodated within the existing urban fabric via redevelopment.

And then there’s The Age’s claim that Melbourne’s urban footprint spreads “more than 150 km east to west”. It doesn’t. Using GIS, I measure at most 75 km from the western edge of Wyndham to Lilydale in the east and 85 km to Pakenham in the south-east. If I measure instead from Melton (putting aside that it’s separated by 9 km of green wedge from the continuously urbanised area), I still get less than 80 km to Lilydale and less than 100 km to Pakenham. Some might think that’s still too big, but it’s a lot less than 150 km plus.

I’ve explained before why I think the problems attributed to Melbourne’s sprawl are exaggerated, but I don’t advocate accelerated fringe growth (although I think there’ll always be some demand for peripheral locations). I’ve also argued that densities need to increase within established areas. If planning and other constraints limiting density (and raising prices) in existing suburbs were moderated, I expect a substantial proportion of fringe settlers would be prepared to trade-off space for a more accessible location. That would have the effect of reducing fringe growth, although in my view the key policy objective is greater housing choice and affordability rather than moderation of sprawl.

P.S. Where any city begins and ends is not by any means a straightforward issue – I’ve discussed how Melbourne’s boundary might be defined before (here and here).