← Why is Acland St becoming “Chadstone by the Bay”?
Should the war on obesity be a key objective of transport policy? → 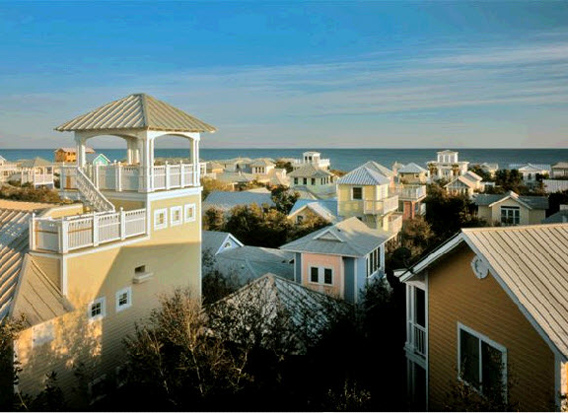 When I first saw pictures of Seaside many years ago, I imagined that’s what the outer suburbs of Melbourne could look like one day. Click on the picture and go for a “walk” around the Florida village that had a key role in inspiring the New Urbanism movement. Seaside is famous – you might know it from its role in The Truman Show or from its distinctive array of “story book” houses.

Although the houses are detached, you’ll see many of the key ideas of New Urbanism in Seaside, including houses that open up to neighbourly streets and paths, have no garages and are within an easy walk of the town centre. Keep an eye out for walking paths. Given the kind of detached housing that’s being built today in Australian cities, I find it extraordinary that the first stage of Seaside was started 30 years ago!

It doesn’t push all the New Urbanism buttons. For example, the range of dwelling types is pretty limited and there’s not much evidence of transit orientation (it’s not a commuter village). Nevertheless, average density approaches the aspirational 25 dwellings per hectare, well in excess of the 15 dwellings per hectare promoted in Melbourne 2030 and in new fringe structure plans like the one for Toolern, near Melton.

For my money, the key reason Seaside has such broad popular appeal is the two and three storey detached “Hansel and Gretel” houses, with their faux widow’s walks and sometimes extravagant follies. Some architects however find it twee – they wince at the sentimentality and overwrought quaintness of the place.

I think it also appeals because of the determination of the architects to eliminate garages. This enables living areas to be placed at the front within a conversation’s distance of the sidewalk. It captures a half-forgotten notion of neighbourliness and conjures romantic images like promenading.

This contrasts with the practice in Melbourne where both new suburban houses and traditional inner city terraces tend to put bedrooms at the front and the main living areas at the rear (only apartments and older suburban houses seem to have living areas facing the street, although they’re usually set way back from the front boundary).

A parallel with Melbourne though is the limited area of private open space. I hear frequent condemnation of big houses with small yards in Melbourne’s outer suburbs (as if buyers can’t make their own decisions about what size yard they want!) but the area of private open space in Seaside looks positively miniscule. As with apartment dwellers, I’d expect the quality of the public realm is an important offset.

As a possible model for Australian suburbia, it’s important to get Seaside in context. It’s not a big place – it only covers 32 hectares (the part of Fishermans Bend mooted for redevelopment is 200 Ha) and has around 500 houses. (Update: the whole area though, including very similar contiguous developments, is about 100 Ha with 1,000 or more houses – see Comments). Also, it’s essentially a beachside resort for people who are well-off. Many of the houses are rented to holiday makers and in that sense it functions more like the swank residential areas close to Hastings Street in Noosa than the suburbs of Melbourne or Sydney.

Like Noosa, it’s a long way from the nearest major urban centre. Dwellings are architect-designed and costly to build – properties at Seaside have sold for as much as $5 million (presumably ones on the beachfront). Further, I suspect a major reason there are so few cars in the streets is that holiday makers fly in and have no need to drive in what is essentially a self-contained resort. The town centre seems improbably built-up for 500 dwellings and that could be because this is a tourist town, drawing visitors from well beyond Seaside’s border.

I can imagine something like Seaside working on old brownfield sites in Melbourne like Fishermans Bend and E-Gate, but what would happen if it were transplanted to the suburban fringe?

The idea of retaining the detached house form while increasing density could be attractive to buyers, as outer suburban Melburnians have stuck steadfastly to the traditional house at the same time as lot sizes have fallen dramatically in response to higher costs. Attached housing still seems a bridge too far for the great bulk of fringe buyers.

While even current McMansion buyers couldn’t afford the sorts of one-off houses in Seaside, if the demand were there I expect Melbourne’s housing industry would be quite capable of churning out a decent range of compact, interesting and realistically-priced multi-storey houses at the upper end of the suburban market. They might not be as varied or picturesque as Seaside’s, but they could be a lot more interesting than what’s going up at the moment.

To be like Seaside though, they’d have to fit on a small lot and embrace the street. I expect noise transmitted between houses could be a serious issue, requiring good dwelling design and good community management. It would be fascinating to know how residents score Seaside on this criterion.

Cars would be a more difficult issue to deal with because life in Melbourne’s outer suburbs without them is unthinkable. Many suburban New Urbanism projects in the US deal with this reality by having lots large enough to accommodate a two car garage at the rear, serviced by an access laneway. An alternative is to provide all parking on the street, much as happens in inner city Melbourne at the moment, but with narrower streets, slower speeds and extensive planting.

I think the hardest task though would be to give suburbanites a reason to live in smaller houses closer to their neighbours. They’ll do that in the city centre, on a beach, around a golf course, or perhaps if the buildings are old or outstanding, but finding a more general and affordable solution is harder. I’m not confident that having a walkable collection of local shops is enough when residents still have the option of driving somewhere more exciting. There has to be something special (or else insanely high transport costs). Perhaps in the future that something special will be provided by more people buying into communities where residents have a special interest in common.

13 Comments on “Would Seaside work in outer suburban Melbourne?”