A bigger agenda for Bixis? 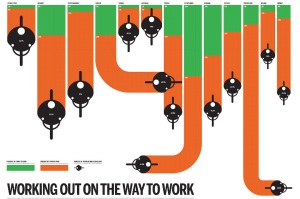 I’ve been amazed at how the fate of the Bixis and reform of the compulsory helmet laws have been brought together and propelled into the public domain as a major public issue.

Before the Bixis, most people thought those who opposed mandatory helmets were the sorts of libertarian nutters who campaigned against obligatory seat belts and corresponded daily with the Unabomber. Now it’s widely recognised there’s a sensible countervailing argument.

There is clearly a power in the idea of Bixis. Melburnites won’t ride them but they like the idea of them.

Perhaps I’m over-reaching here, but I’m thinking that if a few blue bikes can do this with helmets, then they might be turned to a more powerful purpose, like promoting the legitimacy of all bicycles on Melbourne’s streets.

I don’t know if it’s their aspirational Parisian style or the fact that they’re an “official” government program, but the special appeal of Bixis could help to legitimise cyclists as valid road users in the eyes of drivers. END_OF_DOCUMENT_TOKEN_TO_BE_REPLACED

No, I don’t agree with Alan Todd of Kyneton that Melbourne Bicycle Share is a winner and I’ve never thought it would be (see my previous posts here, here and here).

His letter to The Age this morning (“Share the smarts”) contends that bike share schemes have taken off in more than 135 cities around the world. “In any city that values public health, combined with a sustainable solution to transport and congestion problems, they would have to be a winner”, he says.

He also wants to see the compulsory helmet laws repealed so that Melbourne Bicycle Share can flourish.

I think the discussion around the Bixis is very confused. Too many people are mistaking policy on Bixis for policy on cycling. They’re very different – one’s a political stunt, the others real life.

Contrary to Mr Todd’s claim, Bixis won’t do anything whatsoever to reduce congestion even if their numbers are expanded. They are a substitute for walking and public transport in the CBD and near-CBD, not for cars. The sort of person who’s going to cycle at lunch time from Spring St to Melbourne Uni is not generally the sort of person who would otherwise drive. END_OF_DOCUMENT_TOKEN_TO_BE_REPLACED

Now that Le Tour has started, it’s timely to think about cycling.

And yes, Melbourne Bike Share is getting better (sort of). RACV announced back on 21 June that Melbourne is getting more blue Bixis “with 40 bike stations and 500 bikes commencing roll out this week”.

That clearly reads as additional to the existing ten stations and 100 bikes, and so should give us the full 50 bike stations and 600 bikes that were originally announced.

The new stations are located at New Quay, Bourke Street, Merchant St, Yarra’s Edge, along Elizabeth Street, the Rialto Tower, Southern Cross and Parliament Stations, Lygon Street and the Eye and Ear Hospital. Unfortunately the RACV doesn’t provide a time frame for the roll out but the Melbourne Bike Share map indicates that more than 30 stations are now up and running.

That’s good news, but there’s an alarming piece of information in the press release – the 100 bikes that launched the scheme were rented only 700 times (by 400 renters) in the initial three weeks between 1 June and 21 June. END_OF_DOCUMENT_TOKEN_TO_BE_REPLACED

Melbourne Bike Share – how can the Government save face?

There is a near universal consensus that Melbourne Bicycle Share is misconceived and almost certain to fail. Most attention has focussed on the compulsory helmet requirement but as I noted last week, this is a program that addresses a need that doesn’t exist and is designed in a way that will almost guarantee failure.

But no one wants a fiasco. The Government wants to save face, the RACV wants to keep its management contract and no one wants to see Melbourne’s reputation damaged by the failure of the blue Bixis. 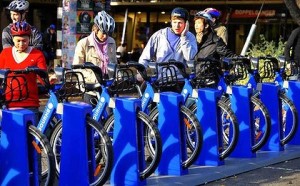 So, I propose some radical surgery for Melbourne Bicycle Share.

First, forget about targeting the scheme at CBD workers running short errands. Reposition it instead as a service to promote tourism. The tariff should be turned around completely to support longer hire periods. For example, something more tourist-friendly, like $20 for the first two hours and $5/hr thereafter – hence $30 for 4 hours – would be close to the mark, although the tariff should be set with the goal of operating on a commercial basis.

Second, the Government should change the law to give anyone who can produce a valid out-of-State ID the right to ride a blue bike without a helmet. The exemption would not apply to any other bicycles and would be justified on the basis of supporting tourism. Tourism has been used to support Sunday trading in the dark and distant past when shopping on the Sabbath was a sin, so it’s an old and much used workhorse. END_OF_DOCUMENT_TOKEN_TO_BE_REPLACED