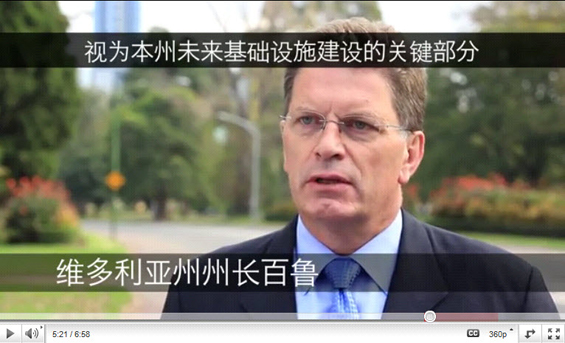 The Baillieu Government is determined to press on with its election commitment to start construction of the $250 million rail link to Avalon Airport in its first term. The Premier did this nice photo op last week waving-in planes at Avalon.

The Age reporter, Andrew Heasley, took a clever line, asking how the Government could commit to Avalon while spending just $6 million on a feasibility study for a rail line to Melbourne Airport. That produced this bizarre explanation from the State’s Aviation Minister, Gordon Rich-Phillips, who effectively said Avalon is going ahead because it’s easier:

While I admire Mr Rich-Phillip’s unusual and possibly courageous frankness, I can’t see that ease matters more than need. Otherwise we’d build new schools where it’s cheapest rather than where the population is growing. Or the Government would be putting Protective Services Officers in retirement villages rather than on rail stations.

I won’t go into depth about what a silly idea the Avalon rail link is because I discussed it only a few weeks ago (Is the Avalon rail link Baillieu’s folly?). Suffice to say that Melbourne Airport is 22 km from the CBD, is the second busiest airport in the country, and has enormous scope for expansion; Avalon is 55 km away, has just six scheduled flights a day, and has enormous scope for expansion. Even if a rail line were built to Avalon, you’d have to wonder what the frequency, hours of operation and ongoing financial losses would be – it’s got to be sobering that Brisbane Airport’s train stops running at 8pm. I don’t have any problem with Avalon Airport per se, my worry is why taxpayers have to kick in when there are better uses our dollars could be put to.

This fascinating PR video produced to market Avalon to Chinese investors (see exhibit) shows what a cast of famous characters are backing Lindsay Fox’s Avalon venture, from the Prime Minister to the Lord Mayor. I know some gilding of the lily should be expected, but seriously Robert Doyle, how could you say “Avalon is the gateway to Melbourne” with a straight face? And as if, Lindsay Fox, travellers using Avalon could continue to get “on a plane in five minutes” if it really did grow to the size you imagine and hope it will?

What I didn’t know until I viewed the video is the Victorian Government, according to the Premier, has “committed to build a fuel pipeline for jets” to Avalon. This is all on the back of Avalon being “Melbourne’s second international airport”. As I’ve said before, it’s time we were given some explanation for what a second international airport actually means – is it something more than a place for motor racing teams and pop stars to land their cargos once a year? No one is going to seriously believe they’ll transport Ferraris to Albert Park or amplifiers to Rod Laver Arena by rail. What’s the logic behind it? We need a clear explanation – in terms of quantified benefits – of why governments are apparently prepared to spend hundreds of millions on infrastructure for Avalon.

Of course, construction of Avalon rail will have minimal practical effect on the need for a rail link to Melbourne Airport, although it could conceivably have a big effect on whether the Government feels obliged politically to proceed with the latter project. What they both have in common however is that no considered case has yet been made for either one. However The Age’s story – subsequently taken up as fact by these letter writers to the paper – implies that rail to Melbourne Airport is automatically a good idea. It’s certainly an infinitely better idea than rail to Avalon (what wouldn’t be?), but it’s by no means obvious that it’s needed now, as I’ve pointed out a number of times before (see Airports & Aviation in Categories list in the sidepane). END_OF_DOCUMENT_TOKEN_TO_BE_REPLACED

Why are new buildings so…..modern?

Many Australians admire old buildings like the Windsor and Parliament House, so I’m a little surprised there’re so few new commercial and public buildings with the elaborate decoration and classical references common in nineteenth century buildings. I was schooled in the modernist tradition so I don’t personally regret this absence all that much, but that doesn’t mean I’m not intrigued why there’s so little of it. Here are a couple of conjectures:

The first and probably obvious reason is that high labour costs mean highly wrought decoration simply isn’t affordable anymore. Modernism had to be invented after WW1 because historical styles were simply getting too expensive to emulate. Nowadays, workers with the requisite skills and artistic talent can get better pay and/or status in other areas. Artisans have been crowded out of the building industry by “new” industries like film, theatre, commercial design, media, advertising and, more lately, the web.

But with contemporary technology like CNC machines and the ability to import prefabricated components from low labour cost countries, this isn’t such a convincing explanation anymore. If there’s demand for greater visual complexity, a country like China – which has plenty of flamboyant modernist buildings – could be using its low cost base to construct buildings rich in decoration. These wouldn’t necessarily need to hark back to earlier periods, they might simply celebrate ornamentation and embellishment.

Another reason could be that large organisations are simply not as prepared to invest in the public domain – provide a positive externality – as they were a century ago. Expectations of proper civic behaviour might be much lower now than they were then. As mentioned here by Ajay Shah, companies and governments now have many other ways of signalling their wealth, power and prestige and accordingly don’t have to rely so much on buildings as a key form of communication.

Yet that argument isn’t entirely convincing either. Major buildings are more spectacular in form and scale than they’ve probably ever been (not least in China) – there seem to be an infinite supply of new architectural feats that apparently defy the laws of physics and mechanics (‘feat-urism’?). There still seems to be plenty of demand for buildings that put a lot of effort into how they look to outside observers — it seems like every city in the world wants a gleaming new art musuem designed by Frank Gehry. END_OF_DOCUMENT_TOKEN_TO_BE_REPLACED

I’ve written the odd bit about architecture and design before (see here) but I always intended to write more. I’d especially like to review buildings, but it’s hard to get any hard information on how buildings perform for their owners and users – that’s one reason why so much architectural writing is either self-serving or vacuous.

He says that he is instinctively unsatisfied with the claim that the USA lacks great architecture because Americans have poor taste. Instead, he offers the following five explanations for “great feats of architecture”:

Surplus — To go beyond merely functional structures requires resources to spare. At low levels of income, people are likely to merely try to get some land and brick and stone together. In these things, we have nonlinear Engel curves. Pratapgarh looks picayune because Shivaji lacked surplus

The desire to make a statement and to impress — Ozymandius wanted to make a point: He wanted ye Mighty to look at his works and despair. I have often felt this was one of the motivations for the structures on Raisina Hill or the Taj Mahal

Arms races — There may also be an element of an arms race in these things. Perhaps the chaps who built the Qutub Minar (1193-1368) in Delhi set off an arms race, where each new potentate who came along was keen to outdo the achievement of the predecessor. I used to think that the Taj Mahal (1632-1648) was so perfect, that it could not be matched, and thus it put an end to this arms race. But then I saw the Badshahi Mosque in Lahore (1671-1673), and I had to revise my opinion……

Transparency — You only need to impress someone when there is asymmetric information, where that someone does not know how great you are. Shah Jahan needed to build big because the targets of his attention did not know the GDP of his dominion and his tax/GDP ratio. In this age of Forbes league tables, Mukesh Ambani does not need to build a fabulous structure for you to know he’s the richest guy in India. A merely functional house suffices; a great feat of architecture is not undertaken

Accountability — The incremental expense of going from a merely functional structure to a great feat of architecture is generally hard to justify. Hence, one might expect to see more interesting architecture from autocratic places+periods, where decision makers wield discretionary power with weak checks and balances. As an example, I think that Britain had the greatest empire, but the architecture of the European continent is superior: this may have to do with the early flowering of democracy in the UK. END_OF_DOCUMENT_TOKEN_TO_BE_REPLACED

This isn’t related to urbanism or Melbourne, but it is surely one of the most important unfolding issues of the decade. This site let’s you keep tabs on how the Chinese Government is responding to Google’s ‘provocation’. Pass it on. END_OF_DOCUMENT_TOKEN_TO_BE_REPLACED