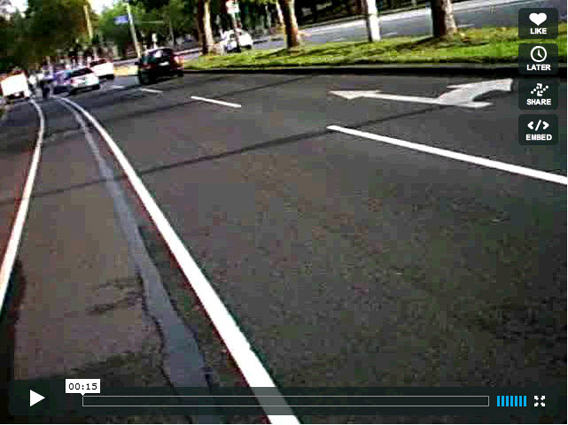 Cyclist gets "cut off" by driver (15 seconds)

The article reports on research by Marilyn Johnson, a research fellow at the Monash University Accident Research Centre. She attached a video camera to the helmets of a small number of cyclists and studied their everyday interactions with other road users (see exhibits).

A key finding is drivers are responsible for 87% of road “incidents” i.e. a near-crash where at least one party has to take evasive action. In 74% of those events, she says, the driver cut the cyclist off, turning in front of the cyclist without either providing enough space, indicating effectively or doing a head check.

The behaviour of drivers was safe for themselves and other drivers, but not for cyclists:

The role of driver behaviour in cyclist safety was found to be more significant than previously thought. Previously, the emphasis was on how cyclists needed to improve their behaviour to improve their safety……Drivers need to be more aware of cyclists on the road. It is essential for cyclist safety that drivers look for cyclists before they change their direction of travel, particularly when turning left.

Dr Johnson also cites a joint study by the Cycling Promotion Fund and National Heart Foundation which surveyed a random sample of 1,000 adults nationally about their attitudes toward cycling. According to this report on the study, “overwhelmingly, unsafe road conditions were the No.1 reason why people weren’t using their bikes as transport, followed by the speed of traffic and a lack of bike paths”.

Although the number of cyclists involved in the study to date and the range of environments is small, I think Dr Johnson’s research is highly suggestive. It underlines again the importance of focussing attention on the key issues that affect cycling and of not getting distracted by side issues.

However the good news is that elderly drivers, including those over 85, are just as safe as other age cohorts. In fact in Victoria there is no compulsory age-related retesting of drivers for this reason.  It seems older drivers actively self-regulate as they feel their capability diminish – they drive less, drive shorter trips, driver slower and in particular avoid driving at night or in wet conditions. END_OF_DOCUMENT_TOKEN_TO_BE_REPLACED