Is bike-share the safest way to cycle?

Abbott recants and embraces a tax on carbon - "if you want to put a price on carbon why not just do it with a simple tax?"! The Melbourne Urbanist is not politically partisan, but gives credit to any politician who shows this sort of courage! (wow, the things they can do these days with a bit of smoke and a few mirrors! Remarkable)

According to this story, riders of share-bikes are involved in fewer accidents and sustain fewer injuries than cyclists who ride their own bikes. The author provides an impressive array of examples.

In Paris, Velib riders account for a third of all bike trips but are involved in only a quarter of all bike crashes. In London, the first 4.5 million trips on the new “Boris bikes” resulted in no serious injuries, whereas the same number of trips on personal bikes injured 12 people.  The situation in  DC is similar:

In its first seven months of operation, Capital Bikeshare users made 330,000 trips. In that time, seven crashes of any kind were reported, and none involved serious injuries. In comparison, there were 338 cyclist injuries and fatalities overall in 2010, according to the District Department of Transportation, with an estimated 28,400 trips per weekday, 5,000 of which take place on Capital Bikeshare bikes.

So it seems likely that Melbourne Bike Share’s unloved Bixis are at least a safer way to travel than ordinary bicycles. The implication of the story is that upright bicycles may be safer than the racers and mountain bikes we’re used to in Australia. That might sound plausible on first hearing, but I’m not so sure.

What strikes me straight up about these numbers is that relative trip rates don’t provide a valid basis for comparison. The only sensible measure is “accidents per km” because it indicates the relative exposure to potential accidents. Share-bike riders pay more the longer they rent the bike, so they have an incentive to take relatively short trips. On the other hand, I think it’s very likely personal riders travel longer distances – e.g. for commuting or leisure – and accordingly have greater exposure to potential accidents.

That doesn’t “disprove” the claim that share-bikes are safer than ordinary bikes, it just says the quoted statistics don’t tell us if they are or they aren’t. But for the sake of argument, let’s suppose share-bikes are safer, even if the difference is less dramatic than the quoted numbers suggest (intuitively, I suspect they actually are a bit safer on a per km basis). But if so, what is the underlying reason? Is it some intrinsic quality of share-bikes? After all, they’re heavier and therefore slower than ordinary bikes so that might explain it. Another reason might be their more upright riding position, which makes them more visible to motorists.

These explanations could have some role, but I think there are more obvious reasons why share-bikes might have a lower accident rate (if in fact they actually do). END_OF_DOCUMENT_TOKEN_TO_BE_REPLACED

Should wearing bicycle helmets be voluntary? 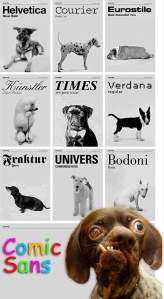 If fonts were dogs

I wouldn’t cycle in Melbourne without a helmet and I think anyone who chooses to cycle on the roads of our fair city without one is either an actuary or a statistics nerd. But as this raging debate shows, many people evidently would.

One reason I’m risk-averse about cycling is the experience of ‘dropping’ my bike with my son strapped in the child seat when he was two. While it was a low-speed accident, he banged his head on the road – fortunately it was encased in a helmet. Would he have been injured if he wasn’t wearing one? I don’t know for sure but I’m very glad I didn’t have to find out.

Another reason is I once worked with a woman whose teenage brother died many years before when he fell off his bike and hit his head on a gutter. This happened back in the days before anyone even thought to wear a helmet. Probably most importantly, I have a relative, a surgeon, who worked on a bicycle trauma study in Qld in the 80s and impressed on me the severity of head trauma suffered by cyclists, almost all of them children.

I wear a helmet because it’s a limited form of insurance against an unlikely but potentially catastrophic event. Like any insurance, the most likely outcome is I’ll pay more in ‘premiums’ than I’ll get back in ‘pay-outs’, but it’s protection against the remote possibility of absolute disaster. I know it won’t offer anything like the protection of a motor cycle helmet, but it will help in some sorts of low-impact events that might otherwise be deadly.

A helmet has no effect on my propensity to cycle. I’m a regular cyclist who commuted for many years, and I’ll always insist on wearing one. But making helmets mandatory for all cyclists is another matter altogether. While there’s still plenty of dispute, from the evidence I’ve seen, the social benefits of mandating helmets are probably out-weighed by the costs.

The key argument against compulsory helmets is they discourage people from enjoying the health benefits of cycling and from generating the associated environmental payoffs. It seems likely these foregone benefits exceed those from avoided head trauma. Also, discouraged riders diminish the number of cyclists on the road and thereby make cycling in traffic more dangerous for all riders.

The “discouraged cyclist” effect manifests in a number of ways. There’s unwanted ‘helmet hair’. Always having a helmet on hand can be inconvenient. Helmets are uncool in some demographics, particularly among children. In hot weather they can be very uncomfortable. Probably most importantly, making helmets compulsory helps create the idea that cycling is inherently more dangerous than it actually is.

The debate isn’t really about the value of choosing to wear a helmet, it’s about whether or not the net benefits at a social level warrant compelling everyone to wear one. I subscribe to the view that any restriction on personal behaviour needs to have pretty strong and unambiguous net benefits to be justified.

The circumstances at the time bicycle helmets were made mandatory (1991 in Victoria) were very different to today. The fatality rate from road accidents was far higher than it is now – there were 13.7 fatalities per 100,000 population in Australia in 1990, versus 6.8 in 2009. Probably most importantly, cycling was seen as something only children – vulnerable and immature – did on a serious scale. New research in the 80s on cycling-related head trauma, mostly among children, made compulsory helmets an easy and widely-applauded decision. At the time, the benefits doubtless seemed strong and unambiguous. END_OF_DOCUMENT_TOKEN_TO_BE_REPLACED

However the good news is that elderly drivers, including those over 85, are just as safe as other age cohorts. In fact in Victoria there is no compulsory age-related retesting of drivers for this reason.  It seems older drivers actively self-regulate as they feel their capability diminish – they drive less, drive shorter trips, driver slower and in particular avoid driving at night or in wet conditions. END_OF_DOCUMENT_TOKEN_TO_BE_REPLACED