Are driverless cars a game changer?

A common observation by many historians I’ve read goes like this: “they failed to understand just how important such-and-such was going to be in the future”. In many cases, “such-and-such” is a decisive technology that went unrecognized until it ended up completely changing the game.

Well, I think one technology that’s being grossly under-estimated today is Driverless Cars (DCs). If they could deliver fully on their promise, they’d have an enormous impact and bring a triple bottom line improvement to our cities – more efficient, more equitable and better for the environment.

There’s plenty of commentary around on driverless cars and I wrote at length on their potential as recently as May 31, in Are driverless cars coming?  In that piece, I discussed the current state of the technology and some of the formidable technical, social and legal obstacles to a driverless car fleet.

However as we know from the history of electricity, public sanitation, the car, the computer, inoculation, the pill and many other innovations, it’s very hard to deny an irresistible idea. Given enough time – say the 30 year horizon typical of current planning strategies – it’s possible the sheer weight of benefits DCs promise our cities will provide the motive force to overcome these obstacles.

The key potential benefits are:

These are potentially enormous private and social benefits. In addition, the warrant for owning a private vehicle would be greatly reduced in a world of DCs. If a total or substantial shift to DC-sharing were achieved, the size of the urban car fleet would be reduced by an order of magnitude. There would be many benefits:

There are other potential strategic benefits too. Driverless cars could greatly reduce (though not eliminate) the need for public transport. This would offer a number of potential advantages:

DCs aren’t just a replacement for the car, they’re a potential game-changer for the entire urban transport task. END_OF_DOCUMENT_TOKEN_TO_BE_REPLACED

Is exempting petrol from the carbon tax such a big problem? 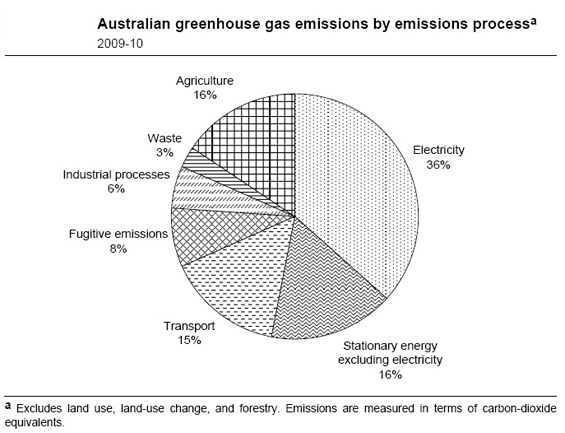 Given Australia already has a large excise tax on petrol, exempting automotive fuel bought by “families, tradies and small businesses” from the Gillard Government’s carbon tax is not the disaster some would have us believe.

Australia has a minority government so compromise was inevitable – two of the independents, Tony Windsor and Rob Oakeshott, wouldn’t be party to any increase in the price of fuel for their country constituents. It was either put a price on most but not all sources of greenhouse gas, or have the whole idea shot down yet again.

These amounts are much less than motorists already pay via the $0.38 per litre excise tax on petrol and diesel (there’s no excise on LPG). While it might have a “sin tax” dimension in relation to cigarettes and alcohol, in the case of automotive fuel the excise is not aimed at making motorists pay for roads or for the external costs of petrol – it’s just a convenient way of raising revenue (although it’s not as good as it used to be since John Howard abolished automatic indexation of the price in 2001).

Nevertheless the excise tax is a serious deterrent to driving. The Productivity Commission’s recent report, Carbon emission policies in key economies, calculates that “in 2009-10, fuel taxes reduced emissions from road transport by 8 to 23 percent in Australia at an average cost of $57-$59 per tonne of CO2-e”. Although not put in place with the purpose of abating emissions, the excise already has a much more significant effect on driving than any level of carbon price that’s been seriously touted in the political debate. Based on the CSIRO’s estimates, it could be argued its effect is equivalent to a carbon tax of over $100 per tonne (the relationship isn’t linear – there’re diminishing returns from a marginal increase as the fuel tax gets bigger).

Thus there’s a good argument that automotive fuel is one of the few areas where consumers already pay a high level of tax over and above the GST. Indeed, if it were so minded, the Government could’ve imposed the new carbon tax on petrol and diesel and simply provided an equal offsetting reduction in the level of the existing fuel excise tax. There wouldn’t be a lot of political or economic sense in that, but it illustrates the principle. END_OF_DOCUMENT_TOKEN_TO_BE_REPLACED 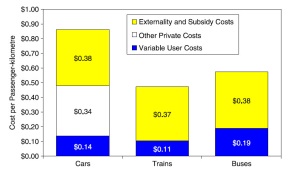 Second, although their composition is quite different, the social costs of private and public transport are essentially the same, at around 38c per passenger kilometre. One big difference of course is that subsidies for public transport are paid in actual dollars by government whereas the social costs of cars are largely an unpaid burden on others (primarily other road users). END_OF_DOCUMENT_TOKEN_TO_BE_REPLACED