-Sydney buses from the air 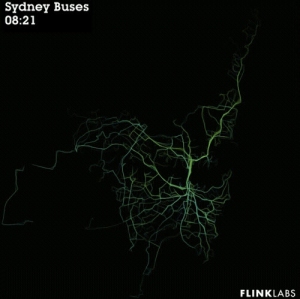 Melbourne data visualisation company, Flink Labs, has produced another excellent transport animation – this time it’s 24 hours in the life of Sydney buses. Flink Labs prepared it as part of the apps4nsw program.

There’s also an associated real time bus map which uses GPS to show the location of Sydney’s many buses. It’s updated every minute.

Unfortunately it might not work with Internet Explorer (hmmm, Flink Labs must have a very interesting business model – maybe it’s intended solely for smartphones?).

Sure are a lot of buses in Sydney!

Readers might recall Flink Lab’s superb animation of Melbourne’s trains which appeared on these pages in July.

See also these animations of transport in Auckland and Lisbon.

Last year I linked to an animation of Melbourne’s trains system developed by Flink Labs. This one (click on map) shows a day in the life of public transport in Auckland and was developed by Chris McDowell. He says:

The animation begins at 3am on a typical Monday morning. A pair of blue squiggles depict the Airport buses shuttling late night travellers between the Downtown Ferry Terminal and Auckland International. From 5am, a skeleton service of local buses begins making trips from the outer suburbs to the inner city and the first ferry departs for Waiheke Island. Over the next few hours the volume and frequency of vehicles steadily increases until we reach peak morning rush hour. By 8am the city’s major transportation corridors are clearly delineated by a stream of buses filled with commuters. After 9am the volume of vehicles drops a little and stays steady until the schools get out and the evening commute begins. The animation ends at midnight with just a few night buses moving passengers away from the central city. END_OF_DOCUMENT_TOKEN_TO_BE_REPLACED

Melbourne’s trains from the air

This outstanding satellite-like view of Melbourne’s trains running over the course of a day was developed about twelve months ago by Flink Labs, a new Melbourne data visualisation firm. In their words:

“Inspired by the foraging of ants and their pheromone trails, this visualisation provides the viewer with a satellite-like view of the entire train network over an accelerated timeframe. The visualisation exposes the ebbs and flows of the system along with a surprising level of complexity, not obvious to the viewer at a single point in time or at the scale of an individual train.

The day starts and the train network awakens, slowly at first, then increases to peak hour levels around 9am. A steady active state continues through the day, then increases again as school students, then workers, commute home from the city. Finally, the system quietens as the last trains depart at the end of the day. END_OF_DOCUMENT_TOKEN_TO_BE_REPLACED