Should bus lanes be shared? 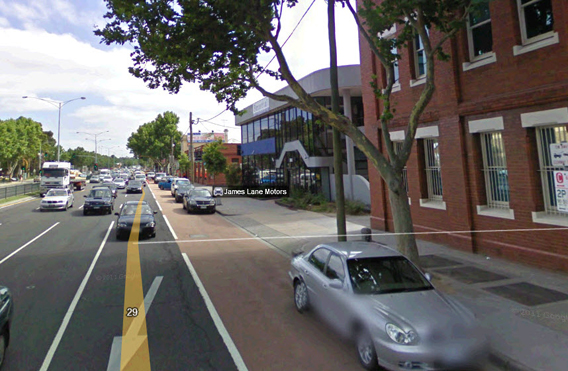 At present, only buses and bicycles can use the bus lane on Hoddle St (it runs on the south side of Hoddle between the Eastern Freeway and Victoria Parade – there’s no bus lane on the northern side).

The reporter for The Age, Jason Dowling, did his homework and canvassed a number of organisations with an interest in the matter. The Government and the Victorian Motorcycle Council evidently favour buses, motorcycles and bicycles, but:

I can’t see any problem with motorcycles and scooters using the bus lane. They’re fast enough so they won’t hold up buses and they’re small enough that they shouldn’t present queuing problems at intersections.  Although they’re not without problems (noise and pollution from two strokes), they’re a relatively efficient form of transport compared to cars and low occupancy buses. If cyclists can successfully share a lane with buses that barely fit, contending with motorcycles should be a cakewalk. Motorcycles warrant space in the bus lane.

However the logic of the RACV’s argument that taxis and hire cars should be able to use bus lanes is hard to fathom. There’s no environmental or equity benefit to be gained from making a trip by taxi rather than by car. The only real difference is that in one case you’re paying for a chauffeur and in the other you’re doing the driving yourself (although for a traveller from one of the 10% of Melbourne households that don’t own a car the equation would be different).

Taxis provide an important service, but they aren’t “public transport” in the meaningful sense of a vehicle shared by multiple passengers going to multiple destinations (except sometimes at the airport). They are “public transport” only in the narrow sense that they’re available to anyone for a price. That’s also true of rental cars and I can’t see any reason why they should get access to bus lanes either.

If anything, bicycles are probably the least appropriate mode to share with buses. They’re slower and hence can potentially hold buses up, depending on conditions. In order to overtake a cyclist safely, a bus on Hoddle St will need to enter the adjoining lane, thus weakening to some degree the whole point of a dedicated bus lane. END_OF_DOCUMENT_TOKEN_TO_BE_REPLACED

Should motorcycles have a bigger role? 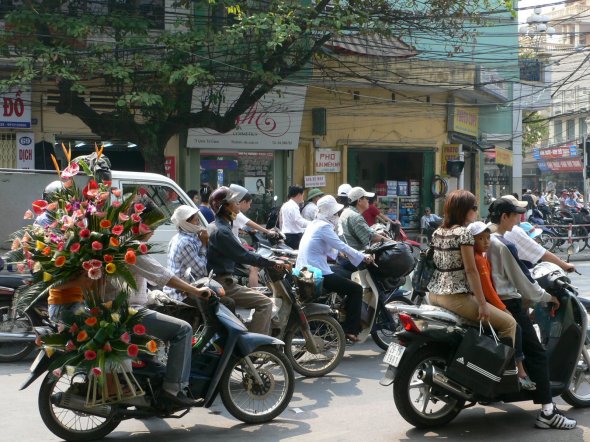 Scooters and Motorcycles (SAMs) in Hanoi

Public transport, cycling and hybrid cars get a lot of attention as responses to climate change and peak oil, but the potential of scooters and small motorcycles seems to pass largely unnoticed. That’s a pity because powered two wheelers are the mode of choice in places like Hanoi where fuel prices are very high relative to incomes. They offer the key advantages of cars – on-demand response, a direct route to the traveller’s destination and speed – but at much lower cost. Indeed, if fuel prices go stratospheric, I expect a very large number of urban Australians will choose this mode of travel ahead of public transport.

A lot of policy attention is quite properly given to improving the safety of riders, but very little is given to developing scooters and motorcycles (hereinafter SAMs) as part of a comprehensive transport strategy. That’s unfortunate because there would potentially be many benefits for the wider society if they had a much larger share of all travel within our capital cities.

SAMs (and I include power-assisted bicycles in this category) have many attractions for riders. They are remarkably inexpensive to purchase and cost little to run. They can be ‘threaded’ through congested traffic, are cheap to park, and in some places they can be parked legally on footpaths. Most machines can carry a passenger and small items like groceries (or much more in Hanoi!). Most importantly, riders don’t have to wait for them, or transfer to another one mid-journey, or stop frequently, or take a circuitous route to get where they’re going. In most places they’re so easy to park that riders don’t have to walk far to them either.

Compared to the large proportion of car journeys that involve only the driver, SAMs also have many social benefits. They require only a fraction of the road space, consume much less fuel and emit considerably less greenhouse gas. They need little space for parking and don’t require new dedicated infrastructure (although some improvements to roads would help). Most importantly, they are potentially attractive to new classes of travellers because, like bicycles, they’re private and hence flexible.

The share of trips taken by SAMs may increase organically in the future in response to higher petrol prices and increasing traffic congestion. But given their social benefits, it would be good policy to actively encourage greater uptake of SAMs in lieu of driving. Safety is the key obstacle, so that’s where any strategy has to start. Current approaches to safety stress factors like rider skills and greater awareness of SAMs on the part of drivers. These are important, however within large urban areas the best strategy is safety in numbers. Achieving a critical mass of riders could be facilitated by initiatives such as lowering registration charges for small capacity SAMs, relaxing restrictions on lane-splitting, giving riders access to transit lanes, and increasing the supply of dedicated parking spaces (with locking points). There might also be scope for small works – for example, access lanes could be reserved to enable riders to move directly to the head of traffic at intersections.

But there are other important issues that need to be addressed too. Engines in SAMs are not generally as sophisticated in dealing with pollutants on a per kilometre basis as car engines. Nor are they generally as quiet under acceleration. These drawbacks are partly technical – it’s harder, for example, to incorporate catalytic converters in SAMs – but they can also be addressed through better regulations and more pro-active enforcement. In the medium term, electrically powered SAMs may mitigate some of these problems. END_OF_DOCUMENT_TOKEN_TO_BE_REPLACED