How far do we walk to the station? 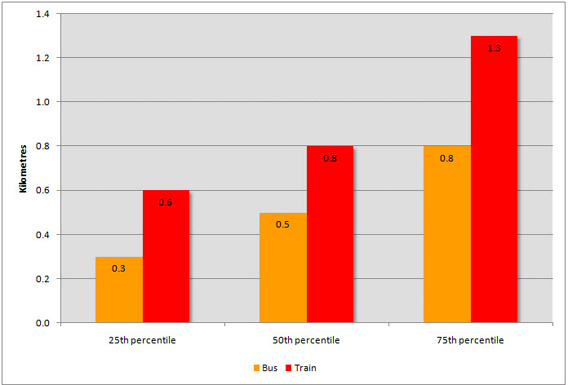 Planners invariably work on the basis that bus and tram users will walk no more than 400 metres from home to the nearest stop. It’s known travellers will walk further to catch a train, so the maximum walk distance to a station is accordingly usually taken as 800 metres.

If the VISTA methodology is right, these findings can be interpreted a number of ways. One is that travellers have to walk unreasonably long distances in Melbourne, perhaps because bus and train coverage is too sparse, or stops are poorly located. Alternatively, it could show travellers are prepared to walk much further than planners have historically assumed (I’m sure some would even argue the exercise is good for them!).

Standards like 400/800 metres are often justified on the grounds that if travellers have to walk any further, they will choose to drive instead, thus lowering the demand for public transport. It’s argued that trains can command longer walk distances because experience shows travellers will walk further if they’re taking long trips, or if the mode is fast (train trips tend to be much longer than other modes, both public and private, and also faster because they have their own dedicated right-of-way).

While that’s all fair enough, I don’t think it draws out the policy implications as clearly as it might. I think there’s another way of interpreting the data on trains in particular. Trips by train are indeed longer and faster than those by other modes, but the key reason travellers walk long distances to stations is they have to – they don’t have a choice.

That’s primarily because the key market for trains is workers travelling from the suburbs to the city centre. Driving simply isn’t a realistic option for most of these commuters – parking in or close to the centre is too expensive and the combination of distance and traffic makes driving too slow and too costly. Limited parking means it’s also hard to drive to the station. In addition, there are all those “captive” travellers who don’t have access to a car or can’t drive (e.g. students) but have high value trips to make.

In other words there are many trips where the car is simply not a realistic alternative to the train. In these cases the maximum distance people are prepared to walk (or have to walk!) is much longer than the standard 800 metre maximum. Not having an alternative, train users walk as far as they have to.

Accepting the legitimacy of longer walk distances could possibly have implications in a number of areas, for example in the design of feeder bus services, the spatial extent of development around stations, and in some cases even the spacing of stations. But most stations are already a considerable distance apart, so the practical implications are probably limited.

However where this way of looking at the issue might have particular relevance is in the spacing of tram stops. Unfortunately I don’t have any data to hand on actual tram walk distances in Melbourne, but my understanding is they too are longer than the 400 metre standard suggests. Further, many tram stops in Melbourne are closely spaced – for example, in the inner eastern suburbs they are every 200-300 metres. END_OF_DOCUMENT_TOKEN_TO_BE_REPLACED

How many travellers use the trains? 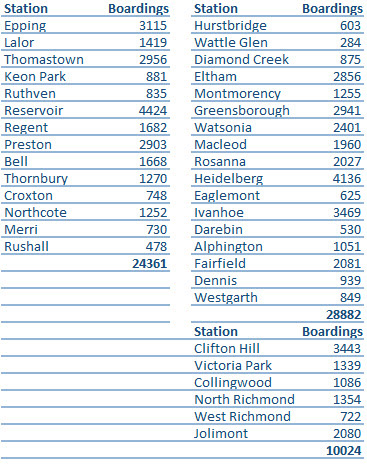 The President of the Public Transport Users Association, Daniel Bowen, posted some “unofficial” stats last week on boardings at Melbourne’s railway stations in 2008-09. I’ve used these numbers to put together the accompanying exhibit showing the number of weekday boardings on the Epping and Hurstbridge lines. These two lines join into one at Clifton Hill so I’ve shown the section from there to Jolimont separately (too much effort to do any other lines!).

Daniel emphasises these numbers come with no warranty as to their accuracy but they did come from a “good source” in the Department of Transport. He reckons inflating the numbers by 11.4% will give a fair estimate of 2010-11 boardings.

I want to make a number of essentially speculative observations prompted by these numbers (for the purposes of this discussion I’ll leave the numbers as they are).

First, there seems to be no statistically significant relationship between the number of boardings and distance from the city centre i.e. from Jolimont to both Epping and Hurstbridge (admittedly my measure of “distance” is rank order of stations not kilometres, but I don’t think that matters). So while the proportion of the population resident around each station that uses the train generally declines with distance from the centre, the absolute number of boardings isn’t correlated with distance.

This may seem surprising because stations close to the centre are more proximate to the CBD’s many and various attractions and might be thought to enjoy higher dwelling densities than more distant stations. However it appears that other variables, such as the accessibility of a station to the surrounding population, are a more important determinant of the number of boardings.

Second, location on a junction of the rail network is not a guarantee of a large volume of boardings and nor does the absence of a junction mean a station will only ever have a minor role. Clifton Hill is the only station on this line that’s on a junction and has a reasonably large number of boardings, but not as many as Ivanhoe, Heidelberg or Reservoir.

Clifton Hill only ranks 36th in patronage of all stations (excluding the five loop stations) but that’s better than two other “junction” stations, Burnley (48th) and North Melbourne (90th). Eight of the 20 largest (non-loop) stations happen to be on junctions but twelve aren’t — my interpretation is being on a junction was a distinct advantage in the early days of rail and gave those eight a head start. Nowadays however the broader characteristics of centres appear to be more important drivers of boardings. For example, Ivanhoe is not a large activity centre in terms of jobs, but its station serves two large private schools and is an important pick-up point for buses serving schools in Kew. Heidelberg also has a school but more importantly has a large number of jobs in and around the Austin Hospital and has the local courthouse. Clifton Hill is disconnected from the nearby retail strip, has little nearby space for commercial or more intensive housing development, and is “in competition” with the No. 86 tram. END_OF_DOCUMENT_TOKEN_TO_BE_REPLACED