Would we use an airport train (as much as we say we would)? 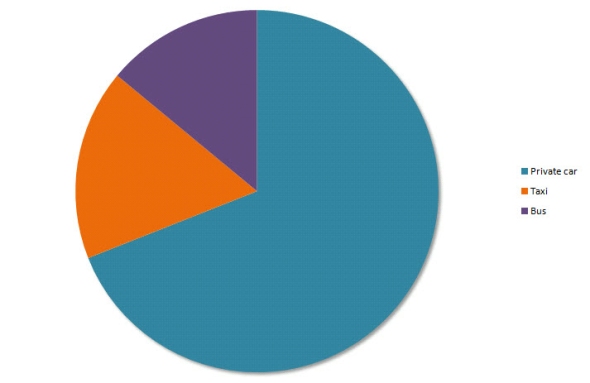 Yesterday’s post on the unreliability of predictions fits nicely with the latest round of calls for a rail line to the airport. The stimulus this time is a report in The Age last week on Melbourne Airport’s plans to upgrade freeway access and build a new terminal.

It set off a predictable and familiar landslide of calls for a train line. There were 141 comments on the article, virtually all of them advocating an airport train. I must say that I’ve hardly met a Melburnian who doesn’t think an airport train should be a high priority of any and all governments.

Some doubtless think others would use a train and thus, they imagine, reduce congestion on roads leading to the airport. But I expect most see themselves avoiding gridlock, punitive airport parking fees, or high taxi fares by using the train for most of their airport travel.

And yet if the train were built, there’s no doubt their prediction would prove to be enormously over-optimistic. Brisbane has a train from the CBD to the airport that carries just 5% of all travellers (another 3% come by bus). Sydney has a train too – it only carries 10% of all travellers (and a further 2% access the airport by bus). As Jarrett Walker observes, the political popularity of airport rail “is always several orders of magnitude above its actual ridership”.

Is there any reason to think that a train to Melbourne airport would increase public transport’s existing share of travel by a significantly greater amount than the trains have in these other cities?

Even without a train, Melbourne Airport already has a higher public transport mode share than either Sydney or Brisbane, with 14% of travellers accessing the terminal by bus. The former Government’s specification for a future airport train was a $16 fare, 20 minute trip time and 15 minute frequency. That’s much the same as SkyBus provides at present.

It’s true trains are generally more appealing than buses, but I can’t see that’s likely to lift public transport’s share significantly – certainly it hasn’t been enough in Brisbane and Sydney. It’s more likely it would cannibalise SkyBus and perhaps gain one or two additional percentage points of mode share.

It’s often argued that if an airport train were priced at a Zone 1-2 fare, it would attract higher patronage than SkyBus. That’s likely to be true, but it’s totally unrealistic – no Government is going to spend billions on an airport rail line and then subsidise its operations. And nor should it.

In any event, I doubt the increase in patronage would be anywhere near as dramatic as some assume. There is a host of reasons why the great majority of travellers would still prefer to drive or take a taxi than pay even a Zone 1-2 fare.

For example, most airport trips are to or from homes and workplaces in the suburbs – a taxi or a car is usually going to be more convenient than going to the local station and transferring to the airport service at Southern Cross. For many regular travellers, taxis and parking are cheap because they’re a business cost.

For tourists, it’s easy to justify a taxi for an occasional and important trip. Most tourists also travel with at least one other person, so in many cases that will improve the competitiveness of a taxi, or the long term car park, relative to public transport (I’ve elaborated on these reasons in previous posts – see Airports & aviation category in sidebar). END_OF_DOCUMENT_TOKEN_TO_BE_REPLACED

More on rail link to airport

The Age is continuing its campaign for a new rail line to be built from the city centre to Melbourne Airport (I discussed this previously on March 2 – Possible rail link to Melbourne airport). There are also a couple of follow-up letters this morning supporting the idea of a rail link.

In a story yesterday, Airport ‘exploiting’ public on parking fees, The Age reported on a new analysis by the ACCC of airport performance in Australia, noting that parking charges account for 20% of Melbourne Airport’s revenue but just 8% of Sydney Airport’s.

The Age’s reporter, Ari Sharp, said the figures, “could add to calls for a rail link to Melbourne Airport to help overcome the growing problems – and costs – of getting there by car or bus”.

However contrary to The Ages’s apparent inference, the difference in the Sydney and Melbourne figures does not appear to be caused by a rapacious parking operator ripping off travellers who lack an alternative to driving.

What the story didn’t say was that Sydney Airport’s revenue from charges to airlines is $446 million, compared to Melbourne Airport’s comparatively modest $197 million. Parking revenues are much the same ($88m and $95m respectively), hence it’s not at all surprising that parking makes up a much larger proportion of total revenue in Melbourne than Sydney. END_OF_DOCUMENT_TOKEN_TO_BE_REPLACED