← More on scooters
Will the streets of Melbourne look more like Hanoi than Manhattan in the future? →

The Shire of Melton is in two parts. The main part with a population of around 40,000 is Caroline Springs – it is contiguous with the metropolitan area. Melton township is a further 9 km to the west and separated from Caroline Springs by green wedge. 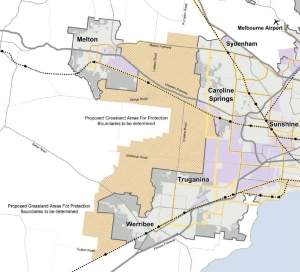 Melton and Caroline Springs. The area shaded brown is the Investigation Area for possible future urban development. It would make sense to "fill-in" the gap. (click to enlarge)

Melton township has a population of around 40,000 (see here) but it does not have a commensurate level of economic activity. Approximately 60% of the workforce is employed outside the township (see here). Some work outside the Melbourne Statistical Division but most commute across the green wedge to ‘mainland’ Melbourne. As only 8% of Melton Shire’s workers commute to the city centre (City of Melbourne), the vast bulk of trips made by township residents, whether for work or otherwise, are made by car.

This pattern is true for all trips indicating that it is a general characteristic of the Shire. For example, the median weekday distance travelled by Shire residents (all modes, all purposes) is 42 km, whereas that for residents of the other six outer suburban LGAs is 27 km.

Further, only 44% of weekday trips originating in Melton Shire (all purposes, all modes) also terminate within the LGA – the comparable figures for Cardinia, Wyndham and Casey are 68%, 63% and 58% respectively. This is unusual because outer suburban LGAs are usually relatively self-contained.

I don’t have data specifically for the residents of Melton township, but I expect their travel distances would be even longer than those for the Shire as a whole. So why do the the citizens of Melton township travel such long distances? There could be a number of factors at play here, each of which is related at least in part to the township’s satellite geography.

First, the township has a serious deficiency in jobs. When the decentralisation programs of the 70s were designed, manufacturing was thought to be the ideal industry for regional centres and satellites towns because it was less dependent on proximity to the city centre than other industries. Manufacturing employment has of course fallen precipitously since the 70s. In later years back office functions like call centres were also prospective candidates but there were many prospective locations for these jobs, both within Australia and overseas.

Even so, it is difficult to explain why a town of 40,000 people has such a poor workforce/jobs ratio. It might be that Melton township is too close to the metropolitan area to offer all the advantages of a regional location (e.g. low labour turnover) yet too far to offer all the advantages of agglomeration (e.g. access to a large labour market). At the very least this hypothesis warrants further examination.

The second explanation for such long travel distances is that the residents of Melton township have to travel across the green wedge just to be on the same footing as ‘mainland’ residents. That is a minimum extra distance of around 9 km from the eastern edge of Melton to the western edge of Caroline Springs.

Third, Melton township’s isolation from the main fabric of the city and its high standard freeway access mean that traffic congestion is lower and speeds are higher. Residents drive further because they can. In suburbs that grow incrementally at the edge of the main metropolitan area, subsequent waves of growth add to traffic on roads and discourage residents from journeying long distances.

A view of the Green Wedge separating Melton from 'mainland Melbourne'. (click to enlarge)

In Melton township’s case it might even be difficult for local service businesses to get a foothold if residents can easily drive to established suppliers in ‘mainland’ Melbourne. Those suppliers can in turn offer the benefits of economies of scale that make it hard for any start-up in Melton to compete.

I’ve little doubt that in due course the township will achieve a much more balanced ratio of local jobs to workers. But a lot of time has already passed and there might still be a long wait. A positive sign is that the Investigation Area for possible future urban development shown in Melbourne @ 5 Million envisages the possibility that Melton might be connected via development with Melbourne ‘proper’.

The lesson to draw from the Melton experience is that the natural advantage of proximity to the established metropolitan areas should never be discarded lightly. The underlying drivers of Melton’s successes and failures warrant detailed study – there are bound to be some powerful lessons for how growth should be handled.