Who’s buying homes on the fringe?

If you think that home buyers in the fringe Growth Area LGAs are predominantly young renters buying their first McMansion, then think again.

Given the brouhaha in The Age today over foreign investment on the fringe, the media might give attention to the finding that 23% of purchasers in these areas are investors. However it is not possible to deduce from the report how many of them live overseas.

But there are plenty of other interesting nuggets of information.

Rather than moving out of rental accommodation and into their first home, most fringe purchasers already own a house. Only 36% are first home buyers. Of the 64% who are ‘upgrading’ from an existing owner-occupied dwelling, a third are buying their third or fourth home.

It is therefore no surprise that the average buyer is not ‘starting out’ on the great suburban journey. Nearly half (48%) of adult buyers are aged 35 years or more. In fact 14% are aged 50 or more.

And while some bought large houses, almost three quarters (74%) purchased a single level dwelling. Moreover, 70% of homes are less than 30 squares and 47% are less than 26 squares. That suggests the great bulk of dwellings are roomy but they’re hardly McMansions. However, small dwellings don’t cut it – even though 12% of buyers are single, only 1% of dwellings are smaller than 15 squares.

END_OF_DOCUMENT_TOKEN_TO_BE_REPLACED

How dense are Melbourne’s outer suburbs?

Kenneth Davidson claimed in The Age yesterday that Melbourne has 15 years’ supply of outer suburban land zoned for urban development at the world’s lowest residential densities of 12.5 to 15 houses per hectare.

Lowest in the world? I think that’s possibly a little harsh when Melbourne is compared with the outer suburbs of US cities. However what I’m really interested in looking at is what Melbourne’s supposed “lowest residential densities” actually look like. What does 15 dwellings per hectare mean on the ground? 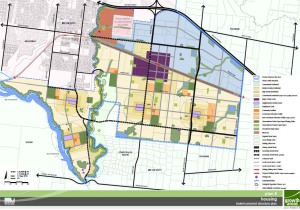 An ideal case study is the new mixed use development planned for Toolern, near Melton. According to the Precinct Structure Plan, when fully developed it is expected to cover 24 sq km, house an estimated 55,000 residents and host businesses that provide 28,000 jobs.

This is an enormous project, covering an area around a fifth larger than the entire inner city municipality of Yarra. It is equivalent in area to a 2.8-kilometre radius circle – if the centre were Melbourne Town Hall, it would extend to Richmond Station in the east, Alexandra Parade in the north, Bolte Bridge in the west and Albert Park in the south.

The minimum average density set down for Toolern is 15 dwellings (per net developable hectare), the same as the target minimum for the growth areas set out in Melbourne @ 5 Million and its predecessor, Melbourne 2030. END_OF_DOCUMENT_TOKEN_TO_BE_REPLACED

The Shire of Melton is in two parts. The main part with a population of around 40,000 is Caroline Springs – it is contiguous with the metropolitan area. Melton township is a further 9 km to the west and separated from Caroline Springs by green wedge. END_OF_DOCUMENT_TOKEN_TO_BE_REPLACED

There are three aspects of this quote that I wouldn’t accept at face value. END_OF_DOCUMENT_TOKEN_TO_BE_REPLACED

This is a common view. In June last year The Age’s editorialist said “Melbourne’s population of 4 million already sprawls across roughly 100 kilometres in all directions, occupying a bigger area than much more populous cities such as London or New York”. END_OF_DOCUMENT_TOKEN_TO_BE_REPLACED