Should bicycle lanes be abolished?

Over on the Bicycle Victoria Forums there’s a thread on something called “vehicular cycling”. This term is new to me and probably to most readers too.

As I read it, the key premise of vehicular cycling is that cyclists should “claim” the roads. Rather than being segregated in bicycle lanes that too often are narrow and impeded by parked cars – or worse, herded into off-road paths that are too indirect and are shared with unpredictable pedestrians – vehicular cyclists ride well away from the edge of a lane (although not in the middle) in order to be more visible to drivers and hence safer. 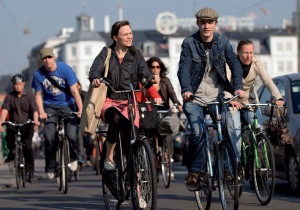 They are concerned that construction of separate cycling infrastructure, such as Copenhagen-style lanes and on-road lanes, will reinforce the idea that cyclists are not legitimate road users.

There’re possibly some nuances here I’ve missed, but that seems to be the general idea. I think there’s a lot of logic to it. Even if a completely segregated network is feasible, it will be a long-term project, so there’s little choice other than to mix it with motorists in the meantime. And the meantime is likely to be a long time. Even in The Netherlands and Denmark, a significant proportion of cycling continues to be done on roads. So it seems sensible to find ways that cyclists and motorists can co-exist safely.

I can see that responsible cyclists, who ride defensively and maximise their visibility, could very well be safer if they adopt a more assertive approach. However I’m much less sanguine about how safe vehicular cycling is for irresponsible riders. Here I’m thinking mainly about children but there are also some adults who do irresponsible things like ride at night in dark clothing or without lights. END_OF_DOCUMENT_TOKEN_TO_BE_REPLACED