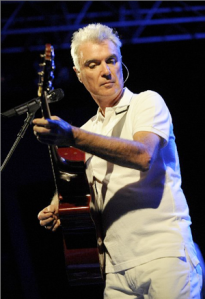 On New York: “If I had a magic wand — ahhh, that’s easy — I’d bury the highways, as they’ve done in some other cities. The West Side Highway and the FDR would both go underground, with parks on top that link the city and its people to their waterfront. Cafes, clubs and recreational stuff too. It would be glorious”.

David Byrne’s book, Bicycle Diaries. He’s been riding his bike in New York since the 80s.

And David Byrne on Houston – land of the free