← Is time on transit more productive than driving?
Will E-Gate curb suburban sprawl? →

Does driving cost less than transit? 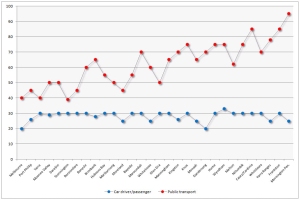 Median journey to work time in Melbourne, by mode, ordered by approx distance of home municipality from CBD (VISTA)

With petrol prices spiking upwards, it’s a good time to examine the relative cost of driving versus public transport. You can save a lot of cash if you’re prepared to live without a car, but you’ll pay in other ways.

According to the RACV’s 2010 Driving Your Dollar survey, it costs $10,668 p.a. on average to run a medium sized car like a Toyota Camry Altise. The cost could be as low as $6,759 p.a. for something small such as a Toyota Yaris or as much as $19,234 p.a. for a behemoth like a Toyota Landcruiser GXL. On the other hand, a zones 1and 2 Yearly Metcard costs $1,859 p.a. for unlimited travel. However ticket outlays need to be adjusted for household size. In my case, my wife would also require a yearly pass and our two children would need travel concession passes. That brings the total cost up to $4,562 p.a., but that’s still considerably less than the Camry’s $10,668 p.a.

Of course many children already have a school travel concession pass. And adults who know they have a limited travel range could probably get by with either a zone 1 ($1,202) or zone 2 ($799) ticket and buy extra daily tickets on those (presumably infrequent) occasions they travel cross-zone. Travellers who use public transport exclusively will in all likelihood spend more on taxis and occasional light truck rental, as well as sacrifice some spontaneity in trip planning, but in cash terms they should still come out well ahead of car owners.

Whatever the overall saving is, it isn’t going to be realised by households who keep their car and simply use it less. The bulk of outlays associated with a car are standing costs like depreciation, insurance and registration. In order to be significantly better off in cash terms, a household either has to lose a second car or decide they can get along without any car at all.

But this simple accounting doesn’t provide a fair comparison. There’s one big difference that has to be taken into account – travel by car is much faster on average than by public transport. The latter is most attractive for work travel, but even then the median journey time in Melbourne is almost double that by car (see accompanying chart). Those longer trip times in part reflect commuters who catch trains from distant places to the city centre. But the main reason is that passengers have to expend time on tasks like walking to the stop, waiting for the service and in some cases transferring between services.

This highlights that public transport is by definition a different beast – it carries multiple passengers to multiple destinations – so it can’t offer the same level of on-demand convenience as a car. Without a car, households reliant on public transport would either have to devote more time to travelling – when they could be doing something more productive – or forego making as many trips. As some of those foregone trips would be valuable, households are worse off. The key reason Melburnians spend so much of their income on cars is that they put a very high value on the time it saves.

A car-free household would do better by moving close to the city centre where it would enjoy a better standard of public transport and be able to walk to more destinations. Moreover, the members would feel the loss of the car less keenly – the higher congestion and higher parking costs near the city centre make a car less attractive anyway. However the savings from ditching the car wouldn’t come free. They would be offset by higher housing costs, less dwelling and garden space and probably more noise. In any event, this isn’t a realistic option for more than 90% of Melbourne’s population – the inner city is just too expensive.

The car-free option will become more attractive for suburbanites over time if governments get serious about investing in public transport and constraining car use, but that will take money and time. A suburbanite reading this will very likely be in an entirely different demographic category by the time suburban public transport in Melbourne is improved to the level where it provides a close substitute for a car!

But perhaps the biggest obstacle to living without a car is that households don’t perceive costs in the way I’ve set them out. Having incurred annual standing charges, they’re inclined to see only the out-of-pocket costs when (unconsciously) calculating the real cost of a trip. Fuel, tyres and maintenance on a Yaris amount to one third of total annual running costs, or $2,250 p.a. for the average 15,000 km p.a. That way of looking at it greatly improves the car’s “offer” compared to public transport.

I lived for around five years in Sydney without a car and likewise in Melbourne for two years. That worked well, but I was young, single and lived close enough to the CBD to walk to work. I relied much more on walking and taxis than I did on public transport. Once children came along however, the value of a car in convenience and time saved far exceeded the additional cost, even in the inner city.

There’s another issue I haven’t addressed about who actually pays when travellers shift from cars to public transport, but that’s a complex topic I’ll have to leave for another time (I’ve looked at some aspects here).

16 Comments on “Does driving cost less than transit?”