– Where do university workers live? 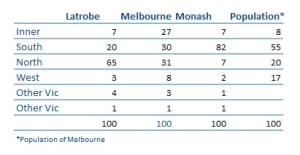 Region of residence within Melbourne of university workers (%)

I’ve said before that there isn’t one ‘Melbourne’ – there are multiple ‘Melbournes’. The home range of Melburnians is pretty restricted – the great bulk of their travel is made within a region defined by their home municipality and contiguous municipalities. Many suburbanites rarely visit the city centre, much less the other side of town.

This pattern of sub-regionalisation is illustrated by Melbourne’s three major universities. I posted on March 16th about the mode shares of work trips to these universities. To summarise, at the time of the 2006 Census, 41% of Melbourne University staff drove to work while over 80% of staff at Monash and La Trobe Universities commuted by car.

The accompanying charts look at something else – where university workers lived in 2006. They show a number of interesting things.

The first chart indicates that staff of these three universities don’t tend to live west of the Maribyrnong. The west has 17% of Melbourne’s population but houses only 8% of Melbourne University’s staff. The ring road provides good accessibility from La Trobe to the west but even so, only 3% of the university’s staff live there.

Second, Monash and La Trobe serve distinct regional markets, in the north and south (of the Yarra) respectively. Melbourne University has a more metropolitan ambit but it still has a sub-regional focus – its staff strongly favour the inner city and the inner northern suburbs.

Third, university staff like to live close to their employer. This is particularly evident with La Trobe, where 56% of staff reside within the four municipalities closest to the university i.e. Darebin, Banyule, Nillumbik and Whittlesea (see second chart). END_OF_DOCUMENT_TOKEN_TO_BE_REPLACED