Do as many Melburnians cycle to work as Americans? 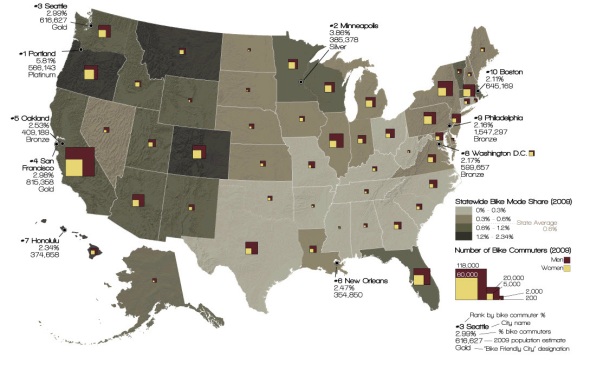 This remarkable map, via Nancy Folbre, shows cycling has a non-trivial share of commuting in at least ten cities in the automobile-centric USA. In Portland OR, 6% of workers commute by bicycle and in Minneapolis 4%. Cycling’s mode share is 3% in Oakland, San Francisco and Seattle, and 2% in Boston, Philadelphia, Washington DC, New Orleans and Honolulu.

So I’ve summed the Statistical Subdivisions of Inner Melbourne, Moreland, Northern Middle Melbourne and Boroondara. They give me a combined area – which I’ll call central Melbourne – of 313 km2 and a total population of 804,112. That’s a little smaller geographically than Portland, which occupies 376 km2, but it’s a much larger population than Portland’s 566,143.

Cycling’s share of commutes in central Melbourne is 2.81%, which seems pretty good compared to most US cities. However given it’s substantially higher population density, it’s surprising that central Melbourne falls well short of Portland, where 5.81% of commutes are by bicycle. Some allowance has to be made for different methodologies – for example, the Portland figures are 2009 and the Melbourne figures are from the 2006 Census – but that’s not enough to explain a gap this size.

My family and I spent a week in Portland in 2009 and I don’t recall any obvious physical differences that favour cycling relative to Melbourne. In fact at first glance Portland doesn’t look especially promising for bicycles. It’s hillier than central Melbourne, it’s colder and it’s lower density. I doubt that Portland is better endowed than central Melbourne with commuter-friendly cycling infrastructure either.

In some ways Portland actually belies its status as the darling of new urbanism. It’s spaghettied with freeways and in many places doesn’t have footpaths. Even with the new light rail system, public transport has a substantially lower share of travel than in Melbourne.

I think a better explanation for cycling’s high commute share is the special demography of Portland. Aaron Renn puts it this way:

He cites Joel Kotkin, who reckons “Portland is to today’s generation what San Francisco was to mine: a hip, not too expensive place for young slackers to go”. I like the way the comedy TV show Portlandia put it, describing Portland as the place “where young people go to retire”. END_OF_DOCUMENT_TOKEN_TO_BE_REPLACED