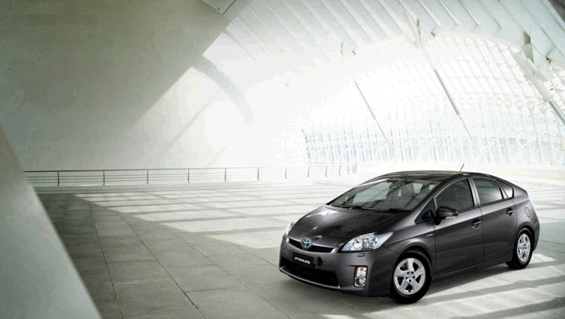 The unique body shape of the Toyota Prius

Educated elites often show distaste for the sort of conspicuous consumption exemplified by McMansions, but it seems almost everyone likes to show off, even greenies.

Two US researchers, Steven Sexton and Alison Sexton (they’re twins), have coined the term “conspicuous conservation” to describe people who spend up big to signal their green status. The standard conventions of conspicuous consumption still apply – like German cars and appliances – but now esteem can also be bought through demonstrations of austerity.

The authors set out the issue in this paper, Conspicuous Conservation: The Prius Effect and Willingness to Pay for Environmental Bona Fides:

Amid heightened concern about environmental damage and global climate change, costly private contributions to environmental protection increasingly confer status once afforded only through ostentatious displays of wastefulness. Consumers may, therefore, undertake costly actions in order to signal their type as environmentally friendly or “green.” The status conferred upon demonstration of environmental friendliness is sufficiently prized that homeowners are known to install solar panels on the shaded sides of houses so that their costly investments are visible from the street.

They examine the sorts of people who buy hybrid cars in Washington (State) and Colorado, focussing on areas with a green demographic where sales of hybrid cars are high and where ‘signalling’ green credentials therefore ought to work. They attempt to isolate the “green halo” effect by comparing sales of the market-leading Toyota Prius – which has a distinctive and unique body shape – against those of comparable hybrids like the Honda Civic. Like all of the other 23 hybrid models on the US market (excepting the Prius), the Civic is virtually indistinguishable from the bigger-selling petrol powered variants of the same car. It is only identified by a small badge and hence, unlike the Prius, fails to signal its environmental credentials.

Anyone who’s watched Larry David tootling around LA in his Prius with uncurbed enthusiasm will get the picture – “we’re Prius drivers….we’re a special breed”. As Dan Becker, the head of the global warming program at the Sierra Club says, “the Prius allowed you to make a green statement with a car for the first time ever”.

The authors cite a market research company’s finding that 57% of Prius buyers say their main reason for choosing the Prius is because “it makes a statement about me”. They refer to another study where most of the individuals interviewed had only a basic understanding of environmental issues or the ecological benefits of hybrid cars but purchased “a symbol they could incorporate into a narrative of who they are or who they wish to be”.

The authors conclude that the conspicuous conservation effect accounts on average for 33% of the Prius’s market share in Colorado and 10% in Washington. No wonder it’s come to be known as the Toyota Pious. END_OF_DOCUMENT_TOKEN_TO_BE_REPLACED