Are we squandering infill housing opportunities? 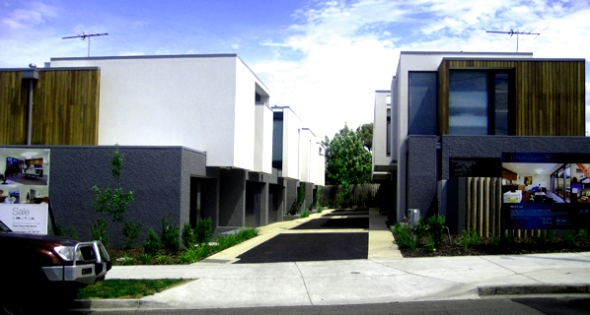 I’ve argued before (here, here and here) that new housing supply within Melbourne’s established suburbs is excessively dependent on small-scale infill housing projects. In the expansive middle ring suburbs, around half of all housing projects provide only one or two additional dwellings, with the great majority providing only one.

It’s therefore important to look at other options, but given it’s carrying most of the burden, it’s also worth asking if infill is being managed as efficiently as it could be.

The exhibit above shows a newly completed infill development at 2-4 Old Heidelberg Rd in suburban Alphington (here are some interior pictures). It provides eight dwellings on an 825 sq m site that originally would’ve been intended to accommodate a single detached house like its neighbour.

That’s a big up-lift in density – if most infill projects yielded this many new dwellings we wouldn’t have a supply problem. But the great bulk are simple dual occupancy developments. This raises the important issue of whether we’re maximising the value we’re getting from the limited supply of precious infill sites.

If projects that could yield four, six or eight new units are only providing one, then that could represent a very high opportunity cost. Given that activity centres in the middle ring suburbs are mostly failing to deliver much new housing, what we ideally want to see is each lot delivering to its full potential – yielding the maximum number of new dwellings that, having regard to its particular circumstances, it reasonably could.

There are of course many “objective” reasons why not all projects can yield as many dwellings as 2-4 Old Heidelberg Rd. Some redevelopment sites are small or inconveniently shaped. Some may have infrastructure inadequacies or access might be hard.

There are also a range of legitimate planning constraints like heritage, over-looking and solar access that might limit the number of units that can be built on a given lot. And the nature of the market in a particular area could mean the highest return comes from building fewer dwellings rather than maximising the total number.

But there are reasons to suspect that “objective” factors do not always, or even usually, explain why a lot isn’t developed to its potential. Consider these two contiguous lots in Elphin St Ivanhoe – although they’re the same size and have a common context, one has six dwellings and the other has two.

The most commonly cited explanation for these sorts of anomalies is the “dead hand” of the planning system. Additional cost and risk is imposed on projects by self-interested opposition from existing residents. Councils often lack the resources and skills to deal with the complexity of sophisticated opposition and, not surprisingly, often take a position more sympathetic to their constituents than to the developer.

There’s a range of measures that have been suggested to tilt the balance more toward redevelopment. These include abolition of third party appeals (the issue got a run in The Age recently), code-based approval systems, more resources for councils, better forward planning, and so on. I endorse this position but there’s no doubt it’s very hard politically, both for councils and the state government.

I think there’s another approach that’s worth thinking about, particularly for the middle ring suburbs. We know infill developers tend to be small and it could be that many simply lack the knowledge, skills, access to finance and appetite for risk to enable them to undertake larger projects. They might not have the wherewithal to push for larger projects in the face of vigorous opposition from neighbours and limited support from timid councils.

Perhaps the project class with the greatest potential for “under-utilisation” is dual occupancy. Landowners carve off a bit of land and sell it, usually for the construction of one additional dwelling. That way they get to stay in their old house and transform some excess land into cash without taking much risk.

That’s a net addition to supply so it’s positive. While in many cases the value of the existing dwelling will preclude more intense development, dual occupancy is a lost opportunity if the entire site could’ve been successfully redeveloped for four, six or eight dwellings. END_OF_DOCUMENT_TOKEN_TO_BE_REPLACED