Is this building offensive? 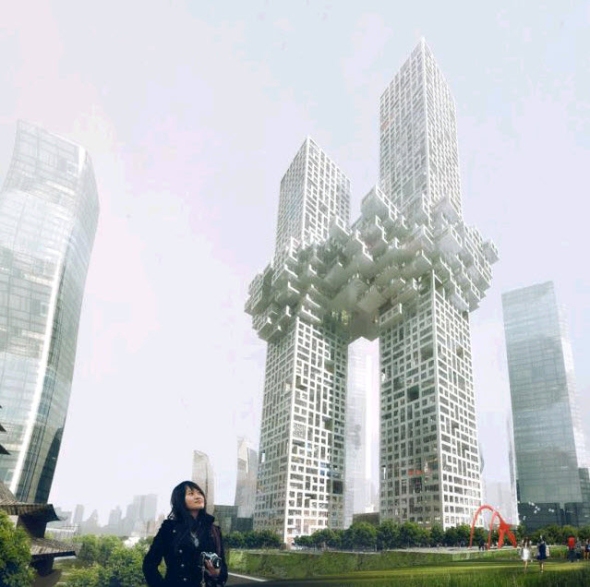 "The Cloud" - Proposed building in South Korea by MVRDV Architects

The exhibit shows a proposed residential development in South Korea by Dutch architects MVRDV. The architects call it The Cloud because they want to create a sense of buildings rising through “the clouds”.

Critics however reckon they look like the twin towers exploding. I see what they mean, but I’m not certain that would’ve been my first thought. Had I not had the WTC meme inserted in my brain from the outset, I might’ve interpreted it first as some form of cancerous growth – a sarcoma – growing out of the façade of an otherwise benign host.

This guy calls it “Safde/Habitat on uppers”. It certainly reminds me of Moshe Safde’s famous Habitat 67 housing project in Montreal. It’s like an enthusiastic gardener grafted Safde’s DNA on to Mies van der Rohe’s and this is the result. Maybe it should be interpreted as the architectural equivalent of sampling in music!

Still, it’s hard to believe the architects didn’t see the twin towers connection themselves (this observer reckons they did but aren’t owning up to it). The way observers have reacted isn’t surprising really: there’s a picture in MVRDV’s PR material of two cloud-wrapped, generic looking towers – the inspiration for the idea – that look remarkably reminiscent of the WTC.

I’m not convinced emulating clouds is a compelling way to go about designing buildings that are literally tall enough to be in the clouds. Seems a bit like double counting. Still, clouds is a less pretentious explanation than the ludicrous guff offered by the architects of this similar-looking building.

Nor do I think the design does well on its own terms. As an expression of cloud-wreathed towers, MVRDV’s design is an unmitigated flop. There’s nothing in that heavy, concrete “growth” that comes even close to evoking the wispy, ethereal sense of clouds. They’re delicate, light, insubstantial and wraithlike – this proposal isn’t. It’s no wonder many people think of the twin towers.

But unlike some others, I don’t accept the design is in any way immoral, insulting to the USA, or a free ride for Al Qaeda. The human mind seems to have a special talent for projecting associations onto the slightest suggestion or stimulus. I accept the architect’s explanation that the 9/11 interpretation wasn’t intended – it’s something we’re projecting from our experience. It wouldn’t get past first base in the US, but I suspect the vast bulk of the world’s population wouldn’t see it in terms of 9/11, or care.