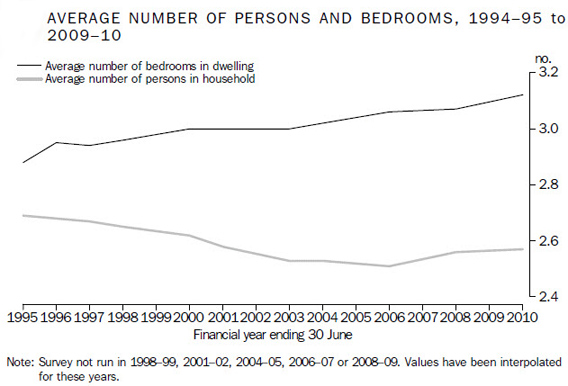 Despite an enormous increase in house prices over the last ten years, real estate commissions stayed relatively constant as a percentage of selling price. Agents consequently enjoyed a spectacular increase in the dollars earned on each sale even as the volume of sales was expanding.

In its new report, Getting the housing we want, the Grattan Institute notes real estate commissions are so big they’re a significant barrier to residential mobility in most States. This is an important public policy issue – the ABS reports that even though average household size is falling, the average number of bedrooms per household is increasing (see exhibit). Any barriers that constrain households from voluntarily moving to dwellings that better match their size should to be addressed. And the same goes for barriers that limit their ability to reduce travelling costs by moving to a new residential location.

In most industries, when firms start earning super-profits we would expect prices to be moderated by an increase in competition. However as the Institute observes, this hasn’t happened with real estate agents – competition is weak:

This is consistent with the industry elsewhere, too – the UK Office of Fair Trading recently conducted a review of UK real estate buying and selling. It found that while 32% of those who had used a traditional real estate agent believed that the fees represented either slightly or very poor value for money, 64% said that they did not negotiate a lower fee.

In Victoria, as in most States, there is no set commission, giving the impression of a lightly regulated industry. Vendors and agents are free to work out whatever arrangement they wish, whether it be a fixed sum, a sliding scale, or something else. However according to this real estate consulting group, the customary fee paid by vendors in Melbourne ranges from 1.6% to 2.5% of the selling price. This doesn’t include advertising or even a property sign – marketing is an extra cost borne by the vendor.

This introductory “how to” guide on buying and selling issued by Consumer Affairs Victoria implies an even higher commission. It illustrates a lesson on negotiation between a vendor and agent with an assumed commission of 3.3% up to $500,000 and 3.85% thereafter (p 22). That’s a $16,500 commission on a $500,000 property. I think there’s a fair chance the target market for the guide will interpret this illustration as somewhere around the “going rate”.

There’s hopefully an extensive literature that looks at why the cost to vendors has risen so much and why competition is so weak. If there is I’m not familiar with it and I don’t have time to read it anyway. It seems to me, though, that the internet should’ve reduced considerably the cost to agents of finding prospective buyers and that a good part of those savings should’ve been passed on to vendors. It also should’ve made it easier for innovators to enter the industry and set up new lower-cost business models. END_OF_DOCUMENT_TOKEN_TO_BE_REPLACED