Why is public transport patronage increasing? 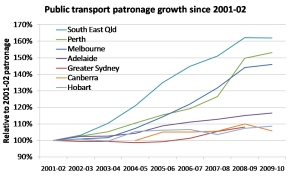 As the accompanying chart shows, public transport patronage has grown sharply in some of Australia’s capitals this past decade but the rate of growth has generally slowed significantly over the last 18 months.

We’re accustomed to thinking that growth in patronage is driven by higher petrol prices but the chart indicates the explanation is probably more complex.

In particular, the considerable differences between cities suggest that one single factor is unlikely to provide a satisfactory explanation. Patronage grew spectacularly in South East Qld, Perth and Melbourne, but was modest in Greater Sydney and unremarkable elsewhere.

It needs to be borne in mind that all of this growth is from a relatively small base. For example, public transport’s share of all motorised travel (weekday and weekend) in Melbourne is even now only around 11%. This is only slightly lower than Sydney’s. Perth is likely to be only around half Melbourne’s level and Brisbane somewhere in between.

The usual suspect when looking at increasing public transport patronage is higher petrol prices. However if that were the key factor we’d expect a more uniform pattern of growth across cities. Canberra has one of the highest levels of car use of all capitals, yet public transport patronage in the nation’s capital barely moved over the period. The same is true of rising traffic congestion. Sydney would have to figure much more prominently if this were the key driver. END_OF_DOCUMENT_TOKEN_TO_BE_REPLACED

Can our cities get bigger (and remain liveable)? 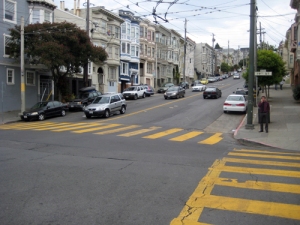 The issue of decentralisation could be back on the table given the elevated significance of the three regionally-based independents*. I’ve previously argued (here and here) that there are big questions about the viability of decentralisation on a large scale, so today I want to look at whether or not our major cities can cope with more growth.

There was quite a bit of interest in the 60s and 70s around the idea of an efficient city size. The assumption that a point was reached where diseconomies of scale set in was part of the rationale for the failed decentralisation push of the Whitlam era.

Australia’s major cities are certainly not bursting at the seams, notwithstanding residents’ concerns about issues like traffic congestion and housing affordability. Sydney is actually only the 80th largest city by population in the world and Melbourne the 87th. Many of the larger cities dwarf ours – Tokyo, for example, has more than nine times as many residents as Sydney. END_OF_DOCUMENT_TOKEN_TO_BE_REPLACED

END_OF_DOCUMENT_TOKEN_TO_BE_REPLACED

I watched SBS’s Insight program on Housing 36 Million earlier this week.  A theme that recurred during the program and in the subsequent on-line discussion was the idea of decentralising a large proportion of the projected population growth from the major cities to provincial centres.

Decentralisation was tried in the 70s as an alternative to capital city growth but, while it had a measurable impact on major country centres like Albury/Wodonga and Bathurst/Orange, it didn’t significantly relieve growth pressures on the capital cities. END_OF_DOCUMENT_TOKEN_TO_BE_REPLACED