– Are cars the key challenge? 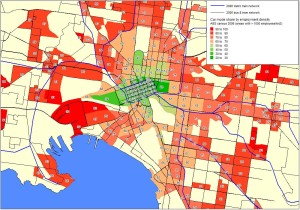 The accompanying map from Charting Transport shows the proportion of journeys to work in Melbourne’s inner city undertaken by car in 2006 — the rest were by public transport, walking and cycling (note that green denotes a low share for cars and red a high share*).

There is a clearly defined area — the ‘golden mile’, bounded by Spring, Flinders, Spencer and La Trobe — where cars capture less than 30% of all journeys. Around Swanston Street the share of journeys taken by car is as low as 24% (click to enlarge map).

But the really striking thing to my mind is the steep increase in car’s mode share as soon as you move beyond walking distance of the rail loop. You only have to go as far as the northern side of Victoria Parade and that share jumps to 50– 60%. Go toward the Hoddle Street end and it’s more than 70%. Once you get into the suburbs, most employment concentrations have a mode split that is 80% – 90% car.

One interpretation of the data is that sustainable modes are doing pretty well in the golden mile. Another is that they’re not doing well enough – maybe no more than 10% of journeys should be considered the ‘natural’ share of the car in this sort of key business area – and hence there’s an opportunity for public transport to increase its share.

I incline to the latter view, but I think there’s another interpretation of this data that’s arguably more significant. Consider what it takes, in terms of density and transit supply, to get the share of journeys to work by car down below 30%.

The ‘golden mile’ is just 2 km2 out of a built up area of around 2,500 km2 (the entire MSD is over 7,500 km2). That little area is the largest single concentration of jobs, by far, in the metropolitan area. It accounts for 10% of all metropolitan employment and is denser by an order of magnitude than any other activity centre in Melbourne, as exemplified by the number of very tall buildings it contains. And despite its diminutive size, it’s the focus of the entire metropolitan train and tram systems. It’s the ‘hub’ where all the ‘spokes’ meet – a giant transport interchange – and is accordingly, again by an order of magnitude, the most accessible place in Melbourne by public transport.

Yet for all the astonishing advantages of job density and public transport quality, a quarter to a third of all those who work in this tiny area still drive to work. Further, literally within one or two blocks of the rail loop, the car’s share of journeys to work rises to 50% and more, notwithstanding that these near-CBD areas themselves have a job density and level of public transport service that is far higher than the rest of the metropolitan area. And this is the journey to work – the trip most likely to be taken by public transport! END_OF_DOCUMENT_TOKEN_TO_BE_REPLACED

Is the car industry’s “Cash for Clunkers” plan better?

The car industry has proposed a revamp of the Gillard Government’s “cash for clunkers” program. They say it will reduce the cost from $400 million to $200 million while still meeting the Government’s target of saving one million tonnes of CO2.

The nub of the proposal is that the rebate on new cars should be increased from $2,000 to $5,000 but targeted strictly at ultra efficient cars like the hybrid Toyota Prius and a number of very small diesel and petrol cars that offer similar levels of efficiency.

This would address a perceived failing of the Gillard Government proposal, which provides the rebate to medium and large cars, including some variants of the new Commodore and Falcon.

Whereas the Government’s proposal would cost a ridiculous $400/tonne of CO2 saved, the industry proposal costs a merely expensive $200 per tonne.

The industry scheme seems like an advance on the original poorly thought-through idea. “Cash for clunkers” was evidently hatched at short notice and released in the heat of the election campaign.

But the modified approach still has drawbacks. It rewards, at taxpayer expense, buyers who would’ve bought ultra-small cars anyway. It’s also likely to increase the price of cheap, old cars and make life a bit harder for drivers confined to this end of the second hand market (although as it only takes 50,000 clunkers off the road it won’t have as big an impact as the Gillard scheme, which eliminates 200,000). And it doesn’t provide an incentive to make all those other small, medium and large cars that most buyers will continue to buy any more efficient. END_OF_DOCUMENT_TOKEN_TO_BE_REPLACED

Sorry for the hoary cliché but I really do think it’s time for a new way of thinking about public transport.

Much of the debate on transport in cities is too simplistic. All too frequently it’s reduced to a simple nostrum: “replace all car travel with public transport”. I think it’s more complex than that and, to use another cliché, requires a more nuanced approach.

Let me be clear from the outset that there are compelling reasons why we need to invest more in public transport – for example, to provide mobility for those without access to a car. Another reason is to provide an alternative to roads that are becoming increasingly congested.

But I’m not convinced that the reason most commonly advanced – to overcome the environmental disadvantages of cars – is all that persuasive. Here’s why. END_OF_DOCUMENT_TOKEN_TO_BE_REPLACED

What should be done about cars?

I’d like to see one of our political leaders steal a march in this election campaign by promising to do something about the environmental and ‘quality of life’ issues associated with car use.

Almost everyone recognises the weakness of our current car fleet in the face of climate change and peak oil, but no one seems to want to do much about it. Most of the focus is on expanding public transport and increasing urban density – at first glance this sounds good, but even on the most optimistic view cars are going to be the dominant mode in Melbourne for a long time yet.

For example, the Victorian Government set a target in Melbourne 2030 to increase public transport’s share of motorised trips to 20% by 2020 (it’s currently around 11%). The report of the Independent Public Inquiry into a Long-Term Public Transport Plan for Sydney, which was released earlier this year, aims to increase public transport’s share of all travel in Sydney to 25% over the next 30 years (currently around 16%) and walking and cycling’s to 10% (page 152)*.

Even if petrol prices suddenly went stratospheric, it would take decades to expand public transport ‘s capacity to a level where it could handle the majority of trips. And it would still have to compete for funding with other areas of serious need like health, education and social housing. This would be more complicated if dramatically higher petrol prices were accompanied by a severe contraction in economic activity. END_OF_DOCUMENT_TOKEN_TO_BE_REPLACED

What if you were the Premier?

Imagine you’ve just been elected Premier. You carried the electorate on a simple but radical two-promise platform: (1) to prohibit alcohol and (2) to shift all travel out of cars and onto public transport.

The Party is solidly behind you. Members agree that both alcohol and cars are bad for the individual and bad for society. You’re lauded as a reformer.

But you’ve not long been in office before you discover just how entrenched car use is in your largest city. Just 10% of trips are made by public transport and 90% of households have at least one car. Less driving would make the community better off but you quickly discover how much people like doing things that are bad for them and bad for others. You have a stiff drink.

For all their talk about sustainability, your predecessors knew the electorate loved cars. The former Premier talked-the-talk about public transport and even threw a few paltry dollars its way, but at the end of the day she didn’t do anything that would come between voters and their cars.

Eager to get started, you begin your quest to reduce car use by investing massively in public transport. You mortgage the State budget for the next 50 years in an endeavour to provide high quality, metro-style public transport across the entire city. Travellers without access to a car, like school children and tourists, think you’re God. CBD workers think you’re Gary Ablett. But you fail to notice that most of them either don’t vote or don’t live in marginal electorates. END_OF_DOCUMENT_TOKEN_TO_BE_REPLACED