What’s a new rail line worth? 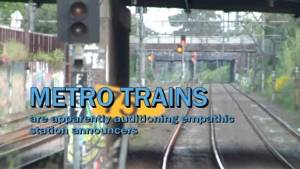 One way to answer this question is to consider what else the money could be spent on.

One possibility is the 1,235 people with disabilities in Victoria who, according to this article, are registered with the Department of Human Services for supported accommodation.

One of them is David Graham, a 44 year old who is legally blind, has an intellectual disability and suffers from epilepsy. Last month his 70 year old mother died of cancer. She had looked after him all his life since he was born premature at 24 weeks. Now Mr Graham is on the waiting list for supported accommodation.

Mr Graham’s plight illustrates the importance of opportunity cost, something I’ve banged on about here at length. In plain terms, when you spend money it refers to what else you could have spent the money on i.e. the opportunities you’re foregoing.

The writer of the article, Carol Nader, refers specifically to the $50 million that Ted Baillieu promised he would spend in his first term to commence building a rail line from the CBD to Avalon Airport. The full cost would be $250 million.

She implies that $50 million could instead be spent on something else, like supported accommodation for people with disabilities. It costs $1.5 million on average she says to provide a unit for five residents and an average annual cost of $125,000 to support each resident. END_OF_DOCUMENT_TOKEN_TO_BE_REPLACED

I think some aspects of the Victorian Opposition’s clumsily titled Plan for Planning are doubtful, especially their proposal for ensuring 25 years land supply within Growth Areas and their intention of levying the Growth Areas Infrastructure Charge at the time of development.

But there are also some good ideas that I want to discuss, notably the proposal for a new strategic plan for Melbourne and another for an audit of the infrastructure capacity of the entire metropolitan area.

A new plan for Melbourne would be timely because Melbourne 2030 is misguided, old and tired. It’s been more than ten years since the process of preparing the metropolitan strategy began and eight years since it was published.

A key problem with Melbourne 2030 is that it was misconceived from the get-go. It never worked properly and simply hasn’t delivered on its lofty ambitions.

Its relevance took a serious hit when the projections of future population growth that underpinned its policies were revised upwards. Further, one of its main directions – the primacy of the CBD – was weakened in 2008 when the Government decided to establish six new CBD-type Central Activities Districts in the suburbs.

The objective of locating nearly 70% of all dwelling commencements out to 2030 within the existing suburbs – rising to almost 80% by 2030 – was also abandoned in 2008 and replaced with the much less challenging target of just 53%.

And of course the much vaunted Urban Growth Boundary lasted only a few years before it was breached. The supply of well-located affordable housing that the plan was intended to foster dried up and neither jobs nor housing gravitated to suburban centres on anything like the scale originally envisaged.

The problem with Melbourne 2030 is that it was driven from the outset by ideological posturing rather than logic. Too many of its key directions weren’t supported by data or analysis and the consultation process was largely a sham. END_OF_DOCUMENT_TOKEN_TO_BE_REPLACED

Does the Opposition’s pitch on Doncaster rail stack up? 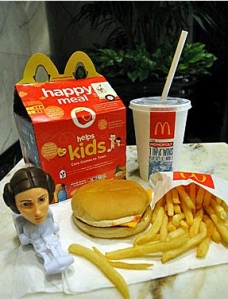 So now the Victorian Opposition has jumped on the Green’s bandwagon and proposed a new rail line along the Eastern Freeway from Clifton Hill to Doncaster!

Ted Baillieu has made an art form of ‘vagueing’ the details, but this is essentially the same proposal as the Greens put forward last month for linking Doncaster with Victoria Park station.

I dealt with the shortcomings of this idea last week (here and here) so I’ll just look at a claim made in The Age that the City of Manningham has low public transport use.

This is attributed to the absence of both trains and trams in Manningham – the only municipality in Melbourne that doesn’t have at least one of these modes.

The reporter, Clay Lucas, says that only 7% of all trips made by residents of Manningham are by public transport compared to the metropolitan Melbourne average of 9% (actually he said 14% but the VISTA travel survey indicates the correct figure is 9%. Note also that this claim does not appear in the on-line version of The Age).

He is right – public transport does indeed have a lower share of trips in Manningham. In fact VISTA shows its share compares poorly with the neighbouring municipalities of Whitehorse, Banyule and Maroondah, which all have rail lines. In these municipalities, public transport carries 10%, 11% and 7%, respectively, of all trips. Still, there’s not all that much in it – the car dominates in all four.

The journey to work is probably a more pertinent measure of the warrant for a rail line to the CBD as peak period passenger volumes determine the need or otherwise for a mass transit system. END_OF_DOCUMENT_TOKEN_TO_BE_REPLACED

Victorian election – why have the Greens dug a black hole? 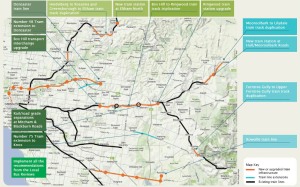 If you think the Greens provide a real alternative to the tired, cynical politics of Labor and the Liberals, then you might be very disappointed in the transport initiative the Green’s are promoting for the forthcoming Victorian election.

The Greens clearly and loudly proclaim that the $6 billion will be found by scrapping the Government’s proposed North East Link, the so-called ‘missing link’ between the metropolitan ring road at Greensborough and the Eastern Freeway at Bulleen.

It almost sounds too good to be true. No additional funding, no new freeway and heaps of new public transport infrastructure! Trouble is, as the Greens well know, it isn’t true – there is no $6 billion to reallocate. END_OF_DOCUMENT_TOKEN_TO_BE_REPLACED

Can we make living together better?

OK so now it’s time to turn to State politics.

I have a modest idea for making our major cities more liveable that I’d like to offer to the Premiers and Opposition Leaders of Victoria, NSW and Queensland in the run up to their forthcoming State elections.

The idea could be named something like the Better Neighbours Initiative or it could as easily be titled Considerate Cities or Liveable Cities or something of that ilk. The idea starts with the recognition that living in close proximity within cities imposes stresses on human relations and demands strong remedial action.

Some of the risks associated with cities, like disease, respond to investment in physical infrastructure. But some don’t – they require behavioural approaches.

The main objective is to limit the stress that inconsiderate behaviour, like noise from “hot” cars or audio amplifiers, imposes on residents and neighbours. I’ll focus on noise here, but the ambit of the liveable cities idea could extend to other problems such as taming the speed and behaviour of cars in local streets and activity centres. END_OF_DOCUMENT_TOKEN_TO_BE_REPLACED

The VFT and Green’s preferences

This blog has devoted a fair bit of attention to the proposed Very Fast Train between Sydney-Canberra-Melbourne (here, here and here), wondering what warrant there is to replace one form of public transport with another.

More attention in fact than any of the mainstream papers or denizens of the blogosphere have mustered, as far as I can tell.

So readers might be interested in this article by Gary Johns published in The Australian last week. It’s notable because he conjectures that the VFT might be the price the Government has to pay to secure Green preferences in this year’s Federal election.

Don’t think I agree with his analysis of the Greens mind (this is the former Special Minister of State in the Keating Government, isn’t it?) but I think his sources on the economics of the VFT are impeccable. Here nevertheless is a less-than-complimentary take on Johns. END_OF_DOCUMENT_TOKEN_TO_BE_REPLACED

What the bookies are saying about the Federal election

If you’re pondering who will win the next Federal election, you might want to take note of what the bookies think.  According to Pollytics yesterday, the current implied probability of the outcome (derived from the odds offered by the five main betting houses) is 74.4% ALP and 25.6% Coalition.  The ALP was 77.9% a month ago.  The trend is down for the ALP but they’re still looking damn good.  BetFair has the ALP at $1.30 and the Coalition at $4.00.