– Metro Strategy: (2) what are the challenges? 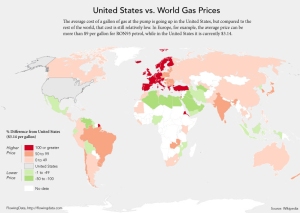 US petrol prices relative to the world

Yesterday I talked about what I thought the new Metropolitan Strategy for Melbourne should be. That was mostly ‘mothers milk’, so now I want to say something about the substance of the strategy – what it should do. I have (mostly) refrained from proposing specific policies or solutions, preferring instead to point out the key policy challenges or directions.

Among other things (this is not exhaustive) the new Metropolitan Strategy should:

Recognise that 90% of motorised travel in Melbourne is made by car and that there are myriad ways drivers and manufacturers are adapting to higher fuel prices. The great majority of travellers prefer to drive if they can despite the expense – they’re not going to give up driving for public transport unless they’re made to.

There are three key challenges in relation to cars. First, provide incentives to increase  the speed of the transition to more fuel and emissions efficient vehicles. Second, make cars more civilised – make them slower and quieter and remove their priority over other carriageway users. Three, manage congestion so that gridlock is avoided and high value trips are given priority.

Recognise that public transport is only a substitute for cars in a limited number of situations. It has two key but growing roles. One is to transport large numbers of people to and from places with high trip densities, like the CBD, where the car is simply incapable of carrying so many people. The other is to provide mobility for those without access to a car.

The focus of public transport policy should be on these two roles. They mean a different approach to public transport from that implied by the popular idea that public transport must always be provided at a level which provides a “viable alternative” to car travel. END_OF_DOCUMENT_TOKEN_TO_BE_REPLACED 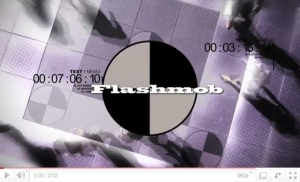 Flashmob with a difference

The Minister for Planning, Matthew Guy, has apparently told The Age that preparation of the Government’s promised metropolitan strategy has started and will be completed within two years.

I’ve previously pointed out some of the areas where I think Melbourne 2030 was found wanting, so I’ll offer some thoughts on what the new strategy should be and do, starting today with what it should be.

First, it should be a strategy for managing the growth of Melbourne. It can’t just be a land use plan, limited to the Planning Minister’s domain. It has to take a multi-portfolio view because planning is only one force shaping the way Melbourne will develop over the next 20, 30 or 40 years. In particular, it must recognise the intimate long-term, two-way relationship between land use and transport, both public and private.

Second, it should positively embrace so-called ‘soft’ policies like regulation, taxation and marketing. It must not limit its perspective solely to ‘hard’ initiatives like capital works and zoning regimes. These are important because they’re long term decisions, but how Melbourne develops in the future will be shaped as much by how behaviour is managed as by what projects are constructed. There are, for example, a host of regulatory and taxation policies – e.g. road pricing – that can potentially have a profound impact on shaping the way the city develops (and not all of them are as politically fraught as road pricing). Some can obviate the need for capital works.

Third, it should focus single-mindedly on what can be done most efficiently and effectively through a growth management strategy. It should resist the temptation to ‘solve’ every economic, social and environmental issue confronting Melbourne. Sometimes what are seen as urban issues are more the symptom of other processes rather than the underlying cause – I’ve previously suggested that diversity is one such issue. It’s important that the strategy understands how it impacts on, or even exacerbates, variables like diversity, but close attention should be given to whether or not it is the appropriate vehicle to achieve change. END_OF_DOCUMENT_TOKEN_TO_BE_REPLACED

There are three aspects of this quote that I wouldn’t accept at face value. END_OF_DOCUMENT_TOKEN_TO_BE_REPLACED