A literary map of Melbourne’s railways?! 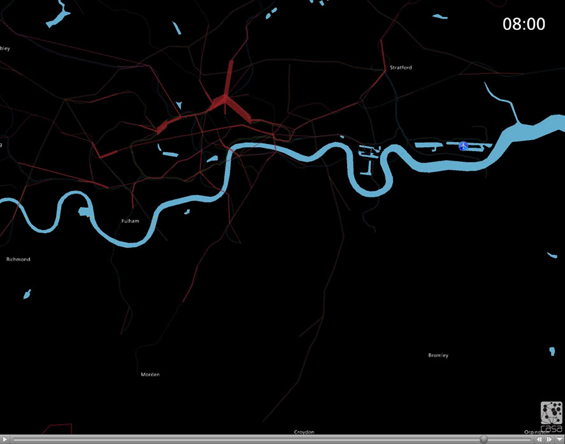 Amimation: London rail network - pulse of the city (not 'literary' but interesting nevertheless)

The English cricket writer, Neville Cardus, is famous for bringing a literary sensibility to the hitherto prosaic task of reporting on the game. International cricketer John Arlott said, “before him, cricket was reported … with him it was for the first time appreciated, felt, and imaginatively described”.

British novelist David Mitchell may be the Neville Cardus of the railways (not the very talented comedian of Mitchell & Webb fame – this is the David Mitchell who wrote the incomparable Cloud Atlas). I recently read his first novel, Ghostwritten, and was struck by the richness of the way one of the characters in the novel describes the London Tube:

As the fine denizens of London Town know, each tube line has a distinct personality and range of mood swings. The Victoria Line for example, breezy and reliable. The Jubilee line, the young disappointment of the family, branching out to the suburbs, eternally having extensions planned, twisting around to Greenwich, and back under the river out east somewhere. The District and Circle Line, well, even Death would rather fork out for a taxi if he’s in a hurry……

Docklands Light Railway, the nouveau riche neighbour, with its Prince Regent, West India Quay and its Gallions Reach and its Royal Albert. Stentorian Piccadilly wouldn’t approve of such artyfartyness, and nor would his twin uncle, Bakerloo. Central, the middle-aged cousin, matter-of-fact, direct, no forking off or going the long way round…….

Then you have the Oddball lines, like Shakespeare’s Oddball plays. Pericles, Hammersmith and City, East Verona Line, Titus of Waterloo……

London is a language. I guess all places are.

There’s lots more. The Northern Line “is the psycho of the family”. Kennington Tube Station is the sort of place “where best-forgotten films starring British rock stars as working class anti-heroes are set”.

Makes me wonder how, given some literary license, the essence of Melbourne’s public transport system might be captured. I know if my local station were a country, it would be cold war Russia; if it were a language it would be Pidgin English; and if it were a mental state it would be deeply depressed.

I’m already imagining a “literary map” of Melbourne’s rail network where every station is a novel – I’ll start by renaming Dandenong to Brighton Rock; Collingwood to Power without glory; Northcote to The slap; Parliament to Wolf Hall; Ringwood to The satanic verses; Toorak to Bonfire of the vanities; Eaglemont to Middlemarch;……. END_OF_DOCUMENT_TOKEN_TO_BE_REPLACED 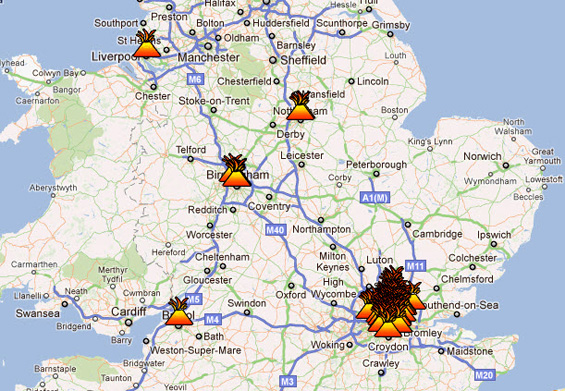 British leftie, Brendan O’Neill, takes an unsympathetic view of the UK rioters in this article, London’s burning: a mob made by the welfare state. He dismisses popular explanations like racism, characterising the rioters as “welfare-state mobs” who are destroying their own communities.

Painting these riots as some kind of action replay of historic political streetfights against capitalist bosses or racist cops might allow armchair radicals to get their intellectual rocks off, as they lift their noses from dusty tomes about the Levellers or the Suffragettes and fantasise that a political upheaval of equal worth is now occurring outside their windows. But such shameless projection misses what is new and peculiar and deeply worrying about these riots. The political context is not the cuts agenda or racist policing – it is the welfare state, which, it is now clear, has nurtured a new generation that has absolutely no sense of community spirit or social solidarity.

Harvard economist Edward Glaeser (author of my last book giveaway, Triumph of the City) has a long interest in the causes and consequences of urban violence. In this paper, The Los Angeles riot and the politics of unrest, Professor Glaeser and colleague Denise DiPasquale examined the tragic history of post-war riots in the US (H/T Christian Dimmer, @remmid).

DiPasquale and Glaeser examined the causes of rioting using international data, evidence from the race riots of the 1960s in the US, and Census data on Los Angeles, 1990. Their empirical results suggest high levels of ethnic diversity and unemployment among young black men, combined with the “sheer size” of LA, all help to explain the 1992 riot.

However they found little support for the notion that poverty is a major determinant of which cities riot. Nor did they find a connection between high levels of migration – a proxy for social capital – and rioting. They conclude that rioting is driven to some extent by the probability and size of punishment. An increase in the probability of arrest, they say, lessens the probability of a riot and its size. Individual costs and benefits matter.

We find some support for the notions that the opportunity cost of time and the potential cost of punishment influence the incidence and intensity of riots. Beyond these individual costs and benefits, community structure matters. In our results, ethnic diversity seems a significant determinant of rioting, while we find little evidence that poverty in the community matters.

Brendan O’Neill says the intrusion of the welfare state in the UK over the past 30 years “has pushed aside older ideals of self-reliance and community spirit”. The most striking thing about the rioters, he says, is how little they seem to care for their own communities – the violence is not political, but merely criminal: END_OF_DOCUMENT_TOKEN_TO_BE_REPLACED

London in the time of cholera

I’ve just read The Ghost Map by Steven Johnson. This extraordinary book, which nominally chronicles the campaign of physician Dr John Snow to persuade Victorian England that cholera was caused by contaminated water rather than noxious odours, also takes the reader on long and fascinating asides into topics like how living at density selected for alcohol-tolerant genes. 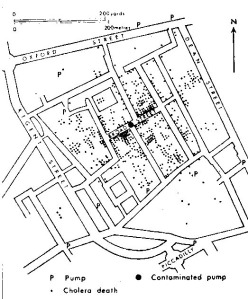 As this article points out, large cities in all parts of the world used to be very dangerous places where the very proximity of humans directly led to disease and death.

I already knew the basics of John Snow’s battle with the established order and his famous map of Broad Street from TV programs and the odd book, like Mathew Kneale’s excellent novel about a Victorian hydraulic engineer, Sweet Thames.

But the particular value of Stevenson’s take on London’s cholera epidemic is the attention it gives to the broader circumstances of the times and the way he burrows deeply into the underlying social, medical and technological issues.

He talks, for example, about how humans living at close quarters historically addressed their vulnerability to polluted water by drinking alcohol instead (notwithstanding it is itself poisonous and addictive). Nothing new about that perhaps, but what is interesting is how the desire to live at higher density gradually selected for genes that could tolerate alcohol: END_OF_DOCUMENT_TOKEN_TO_BE_REPLACED

There are three aspects of this quote that I wouldn’t accept at face value. END_OF_DOCUMENT_TOKEN_TO_BE_REPLACED

This is a common view. In June last year The Age’s editorialist said “Melbourne’s population of 4 million already sprawls across roughly 100 kilometres in all directions, occupying a bigger area than much more populous cities such as London or New York”. END_OF_DOCUMENT_TOKEN_TO_BE_REPLACED