Who’s buying homes on the fringe? 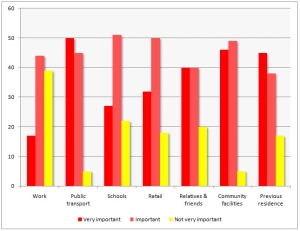 If you think that home buyers in the fringe Growth Area LGAs are predominantly young renters buying their first McMansion, then think again.

Given the brouhaha in The Age today over foreign investment on the fringe, the media might give attention to the finding that 23% of purchasers in these areas are investors. However it is not possible to deduce from the report how many of them live overseas.

But there are plenty of other interesting nuggets of information.

Rather than moving out of rental accommodation and into their first home, most fringe purchasers already own a house. Only 36% are first home buyers. Of the 64% who are ‘upgrading’ from an existing owner-occupied dwelling, a third are buying their third or fourth home.

It is therefore no surprise that the average buyer is not ‘starting out’ on the great suburban journey. Nearly half (48%) of adult buyers are aged 35 years or more. In fact 14% are aged 50 or more.

And while some bought large houses, almost three quarters (74%) purchased a single level dwelling. Moreover, 70% of homes are less than 30 squares and 47% are less than 26 squares. That suggests the great bulk of dwellings are roomy but they’re hardly McMansions. However, small dwellings don’t cut it – even though 12% of buyers are single, only 1% of dwellings are smaller than 15 squares.

END_OF_DOCUMENT_TOKEN_TO_BE_REPLACED

The Age editorialises (21/11/10) that Melbourne 2030 is effectively dead and I agree. The latest nail in the coffin in The Age’s opinion is the apparently burgeoning growth of housing in townships and hamlets located in the peri urban area outside the Urban Growth Boundary (UGB).

I’ve argued before that this sort of “decentralisation” is poor policy (e.g. here and here). But I also think The Age has tended to ‘catastrophise’ the scale of the problem, especially with its highly misleading contention that Melbourne has “sprawled 50% beyond the official growth boundary, spanning 150 kilometres from east to west”.

However what interests me at the moment is why Melbourne 2030 failed. The key reason in my view is that it blithely assumed that enough affordable dwellings – mostly town houses and apartments – could be provided within the established urban areas to avoid the need for the UGB to be extended.

This objective was never realistic for a number of reasons. END_OF_DOCUMENT_TOKEN_TO_BE_REPLACED

Are lots smaller in the outer suburbs than in the inner suburbs?

The Financial Review (paywalled) reported on Saturday that the average house sold within 10 km of the CBD in Melbourne is located on a 511 m2 block, according to data collected by property information provider, RP Data. 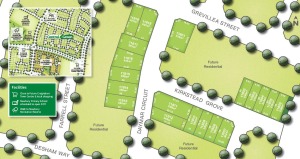 However what is especially interesting about this statistic is how it compares with the outer suburbs. The median size of lots sold in the Growth Areas is currently 513 m2, according to property consultants, Oliver Hume.

In other words, the average lot size is much the same in the two areas.

This is surprising, but a number of caveats are in order. First, some of the properties closer to the CBD would be destined for redevelopment whereas that seems unlikely in the Growth Areas. END_OF_DOCUMENT_TOKEN_TO_BE_REPLACED