← Are these contenders for ‘spin doctor’ of the year?
How much housing can brownfields sites supply? →

Is the 9% increase in public transport fares…fair? 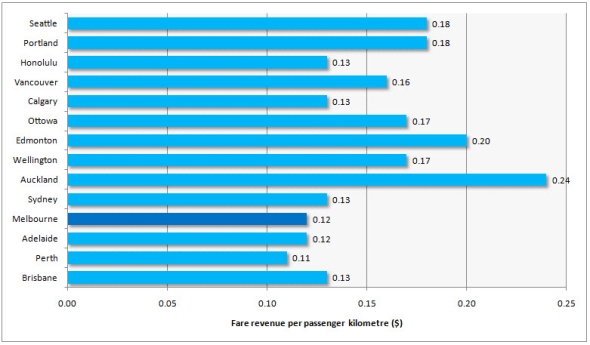 Many people are outraged that the Government has dared to increase public transport fares in real terms. From 1 January, fares in Melbourne will rise by around 9%, well in excess of the rate of inflation (3.6% for the 12 months to the September Quarter).

From what I can make out, I don’t think anyone is questioning the need to increase revenue for public transport. For all its virtues, the system needs billions spent on things like improved signalling, track upgrades and duplications, more train sets, new rail lines, improved security, and much more. Patronage has grown at around 5% p.a. and that increases costs. Indeed, spending more to improve the system is the key to sustaining increasing patronage.

So the issue is not about the need for more money, but rather about where it should come from i.e. who should pay. Additional revenue for higher capital and operating purposes can only come from a limited range of sources. The main possibilities are:

Each of these sources might be able to contribute something, but the revenue task is huge and there are practical and political limits to how much each can put in.

Fares are an important tool because they directly link supply and demand and they have history. Paying for service is a well established principle in public transport – there are very few public transport systems around the world that don’t charge fares.

Melbourne public transport users already get a pretty good deal – their fares recover none of the capital costs and only 44% of operating costs. Moreover, judged against some other cities, Melbourne’s fares aren’t especially high compared to the cost of providing the service (see exhibit).

The key market for the system is CBD workers who on average are reasonably well paid relative to their counterparts in other parts of the city. Further, a significant proportion of public transport users already benefit from concessional fares.

Those who argue that funding should come from general revenue rather than from passengers don’t always think about what would have to be foregone. They often implicitly imagine it would be at the expense of something they personally see as valueless or negative (new freeway construction is a common target).

But there’s nil guarantee of that. Any such decision would be made by the Government of the day according to its priorities and values. It might come at the expense of a very worthy transport project or it might come at the expense of another portfolio, perhaps a highly emotive one like education, health or community services. This attitude just shifts the problem to somewhere else where it might possibly impact others with less capacity than CBD workers.

In the short term – and this increase will take effect within four weeks – there are really only two choices: raise fares or fund the increase from elsewhere in the budget. In the longer term however there are possible alternatives to future fare increases.

One of those options is clawing back evaded fare revenue, but I doubt it is the goldmine many imagine. I don’t find the argument that the private operators and the government are too inefficient to prevent evasion very persuasive.

A more plausible explanation is that the cost of prevention exceeds the revenue likely to be recovered – winning back the marginal dollar gets harder and harder. There’re probably more cost-effective methods that could be used but as a community it’s doubtful we’d tolerate them e.g. draconian policing, Dickensian penalties.

Some opponents of fare increases (e.g. see letter from Brian Buckley, Carlton Nth) reckon hordes of travellers will abandon public transport and start driving, leading to higher social costs i.e. more congestion, more accidents, more emissions, more pollution and more oil consumption. They argue the social cost of this mode shift would exceed the cost of paying for the increase out of general revenue. There are a number of points that need to be made here.

First, the great bulk of public transport users are “captive” and simply don’t have the option of driving. They either can’t drive or they work in the city centre where motoring is simply too expensive due to high parking costs and existing traffic congestion. Rather than abandon fare increases, it would be smarter to deter any shifts to driving by policies such as higher parking charges.

Second, the cost of driving has also risen. For example, the price of petrol has increased much more in real terms over the last ten years than fares. Third, to the extent that the increase in fares might lead to more driving, it’s important to understand that the social costs are an economic cost – while that’s important, economic costs are not the actual cash the public transport operator needs to pay the wages of all those public transport workers.

There are good arguments for taxing the beneficiaries of public transport rather than passengers, but these are complex and politically difficult ideas. Congestion pricing is an essential initiative in Melbourne and I believe it will inevitably happen. But like the idea of levying land uses that benefit from public transport, it won’t be any time soon.

In any event, these sorts of ideas don’t necessarily mean passengers shouldn’t pay higher fares. As argued by the Independent Public Inquiry into Sydney’s long-term public transport needs, a range of sources will be required to assure funding for public transport in the long term. And initiatives like congestion pricing, when they happen, won’t have lower fares as their key purpose.

I shouldn’t overlook the “public transport is a public good” argument, which contends that any increase in fares can’t be justified. As I’ve pointed out before, public transport is not a public good. It’s neither non-rivalrous nor non-excludable – it gets congested and users pay. Of course it has a social function but so do water and energy. As with these utilities, subsidies should be directed at eligible users, not bestowed on all passengers via the fare structure irrespective of income.

Under the new tariff structure, a daily zone 1 myki cap will rise by 52 cents to $6.56. Public transport needs more funding to improve service and grow patronage. Passengers already get a relatively good deal. In my opinion the increase is fair enough.

17 Comments on “Is the 9% increase in public transport fares…fair?”