← What were the most-read posts of 2011?
Does public transport offer enough privacy? →

What to read over the holiday season? 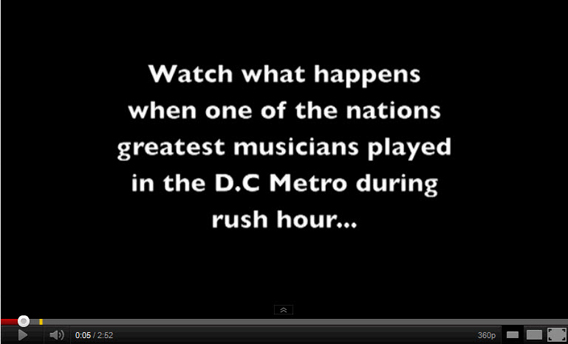 That violin's worth $3.5 million! He's playing some very complex Bach

When I started The Melbourne Urbanist I wasn’t sure what direction it would take. While primarily about planning and development issues, I imagined it might also have a major sideline in reading and literature.

Hence the Reading page in the sidebar. As things have turned out, there hasn’t been much interest in reading and books. For example, The Melbourne Urbanist had 25,000 visits in November but the Reading page only got 29 views, so next year I’ll probably move it elsewhere.

Clearly the readers of The Melbourne Urbanist don’t come here to talk literature. Fair enough, this is the age of specialisation and that’s one of the things the internet does well. However since it’s the holiday season, I have an excuse to talk books.

The thing newspapers love to do at this time of year is find out who’s reading what. Over the years I’ve found some good reads from seeing what politicians, novelists and others are reading (or say they’re reading). The Grattan Institute has put an interesting twist on this tradition – a suggested summer reading list for the Prime Minister. Here it is:

Some interesting suggestions. Of these, I’ve only read The rational optimist and can’t recommend it highly enough (I quoted from it yesterday). It would be a great summer read. If you follow the link to the Grattan Institute, there’s an explanation of the thinking behind the list. Anything by Frank Moorhouse should be interesting and Cold light is about power, secrecy and, of all things, urban planning! So I’ll put that on my “to read” list.

Of the books I’ve read this year, I’d recommend Ryan Avent’s The gated city, He argues in a mere 100 pages that opposition to density is a key reason for American economic stagnation. This is an Amazon Kindle “Single” – it only costs $1.99 and if, like me, you don’t have a Kindle, you can read it on your computer or, in my case, on an iPhone (not so good for the beach, though). I’ve cited it before, here and here.

I’d also recommend Steven Pinker’s The better angels of our nature. He argues that violence at both social and personal levels is much lower than historically it’s ever been. Another fascinating book is Daniel Kahneman’s Thinking: fast and slow. Kahneman is a psychologist and Nobel laureate – lots of insight on why we think the way we do and, especially, why we so often get it wrong. Both of these books are long (and in the modern fashion look like they never had an editor), but they’re worth it.

The best novel I’ve read this year – in fact for a while – is The Finkler Question by Howard Jacobson. It deals insightfully and wittily with some big issues. And it’s beautifully written – a deserving winner of the 2010 Booker.

The key book I’ll be reading over the holiday period is of course Jarrett Walker’s Human Transit, the subject of the recent book giveaway. My copy’s arrived and I’ve already started – looks fantastic. I’ll also finish reading The Streetsweeper by Melburnian Elliot Perlman, the writer of Three Dollars (which has the great reference to Punt Rd I’ve cited before) and then I’ll tackle Dave Egger’s first novel, You shall know our velocity.

Season’s greetings. The Melbourne Urbanist will resume transmission sometime in January (unless seized earlier with the compulsion to write).

5 Comments on “What to read over the holiday season?”